This past week, the currency market took a back seat to the sharp declines in the equity markets. The price action caused several major stock indices to break below their important uptrend lines that have been in place since early-2016. It really isn’t just this week - for example, the S&P 500 has fallen for three consecutive weeks and only managed to advance one day a week in each of those three weeks. It is down 3.8% on the week, about 10% from its high of the month, and is down 0.51% year to date. The S&P 500 wasn’t the only equity index to break down last week, both the Nasdaq and small cap Russell 2000 also did. Only the Dow Jones Industrial Average was able to hold its uptrend line. Getting back to the S&P 500, the index needs to close back above its uptrend line to negate last week’s breakdown or else it will head to the next lines of support at 2550 and 2600.

Most reasons bandied about for the continued drop in equity prices are Trump’s trade war with China, a peak in earnings outlook, or a sustained campaign of Fed rate hikes. There is another factor which doesn’t get a lot of air play - the reduction in central bank liquidity.  In the October 8th newsletter I outlined that at the beginning of October, the Fed increased its balance sheet runoff (quantitative tightening) by $10b per month to $50b per month; and the ECB cut its monthly bond purchases in half to €15bn. Add in the fact that the BOJ has been in stealth tapering mode for a while and it doesn’t take a genius to figure out that there is less free money to prime the equity pump.

As you may recall, in times of a risk off events, such as a selloff in equities, the yen gains on safe haven flows and last week was no different as it was the top performer. Even though the headlines were dominated by the carnage in the equity market, there were some key takeaways from the currency markets. The central banks of Canada, USA, and the Eurozone shed some new light and reaffirmed some current intentions.

Let’s start with the Bank of Canada, on Wednesday, in a move that was widely expected, it hiked its key interest rate by a quarter point to 1.75%, the fifth hike in the cycle that began last summer.  However, the BOC was more hawkish than expected as it dropped the previous reference to a gradual pace of tightening and upgraded its assessment of exports and investment.  It also gave a clear signal that the overnight rate was going to be hiked to the neutral level, which they defined as a range between 2.5%-3.5%. If we assume that they move to the bottom of the range that would imply at least three more quarter-point hikes in the pipeline.  In the classic monkey see monkey do, it looks like the BOC is emulating the Fed with its own drive to rate neutrality – no one saw that coming.

The CAD surged higher by a cent on the BOC’s hawkish hike but the weakness in the equity markets and the underlying strength of the US was too much to overcome. It managed to finish the week flat and as second strongest major currency after the yen. Friday’s price action caused a break of the trend line that has been in place since June; however it did manage to close back below it on Friday. 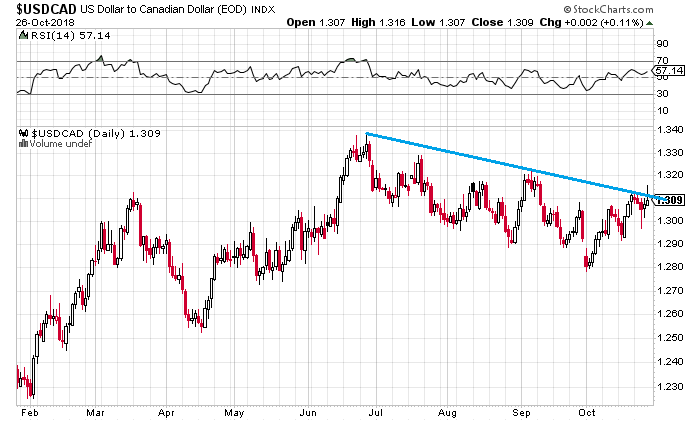 Markets have been wondering if Chairman Powell and et al are serious about a) the current fed funds rate being far from neutral and b) taking the fed funds rate past neutral - which implies a sustained campaign of rate hikes. Wednesday’s release of the Fed’s Beige Book reaffirmed the Fed’s rate hiking campaign. The word “strong” appeared 83 times in the Beige Book, up from 72 in the September 5th version and the most times in at least two years. There’s little doubt in our minds that the Fed is getting more hawkish.

My colleague, David B Granner, loves to add little fun facts in the newsletter. I came across this one that I’m sure he would appreciate. It seems that there is a direct correlation between the height of Federal Reserve Chairpersons and interest rates.  Volker was 6’7” and hiked rates to 16% in the early 80s. Every Chairperson since then has been shorter and shorter and interest rates came down and down. Rates bottomed during Chair Yellen when she began the current rate hiking campaign.  The new Chairperson, Powell, bucked the trend, as he is considerable taller than Chair Yellen – and of course rates are now firmly moving higher.

The US dollar index powered higher during the week towards the year's high set August but reversed lower before the weekend leaving a bearish shooting star candlestick on the chart, which would indicate that an important top has been set.

It was a tough week for the euro – the German central bank, the Bundesbank, warned that the German economy had stalled in Q3; the Eurozone flash composite PMI for October fell to its lowest level since September 2016; and the market continued to push Italian yields higher as the dispute over Italy’s budget with the European Commission intensified. With this backdrop, the ECB had their policy meeting and, as expected, ECB President Draghi rejected calls for a reconsideration of ending its easy monetary policy at year's end. He described the economic slowdown as consistent with the ECB's outlook and didn’t think it was the start of a slowdown. He stressed that monetary policy will stay very accommodative with negative interest rates, fixed-rate fully allocated repos, and liberal collateral rules.  In other words, he still has other tools to deal with potential problems with Italian bond yields. This, of course, reinforces that monetary divergence is still alive and well and will continue until at least mid-2019.

Lastly, don’t look now but China’s currency, the yuan, slid toward its weakest level in a decade and close to a key level of 7 per dollar. The yuan has fallen 9% in the past six months, pressured by Trump’s trade war with China and expectations of further easing by the Chinese central bank. To say that President Trump isn’t going to be pleased with this development is an understatement. 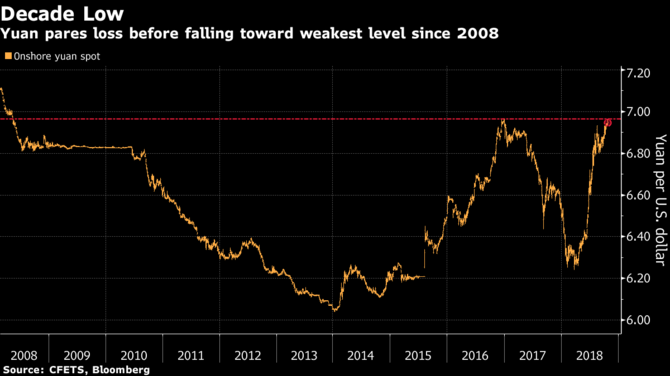