The past week witnessed nothing of note in the True North, some rather interesting statistics from the Land of the Free, notable central bank-speak from the Eurozone, and even a new Prime Minister in Cool Britannia: the aptly named ‘BoJo’ (Boris Johnson). Let’s drill down and take a closer look.

We’ll begin with America. The interesting numbers were crammed into the last two days of the week and did nothing to halt the greenback’s rise against all currencies: quite the contrary, in fact. Jobless claims fell to 206K, well below the call of 219K and once again indicating strength in the US labour market. The Merchandise Trade Gap came in at -74.2 bil., worse than the call of -72.5 bil. (but no one really pays much attention to this metric any longer).  Durable Goods, always a difficult number to forecast, surprised to the upside at +2.0% vs the call of +0.7%.  Ex-transport rose +1.2%, solidly beating the call of +0.2%.

The upshot of all these numbers which, prima facie, indicate continuing strength in the American economy, is to complicate the strategy of the Federal Reserve going forward. Recall recent Retail Sales numbers for June showed a rise of +0.4% vs the call of +0.1% (Ex-autos likewise), evincing a robust consumer market. The Fed will be having a two-day meeting July 30-31, at which time the FOMC is widely expected to announce their decision to lower the overnight rate at least a quarter-point, possibly even a half-point, with a bias to further rate cuts over the balance of the year. Investors had been pricing all this in, buying US Treasury bonds, buying equities and selling the USD. It all seemed so clear! The US economy, while performing reasonably well, needed some interest-rate relief to keep the expansion going, but now that isn’t quite so plain. As a result, traders are evenly split between two rate cuts and three over this week and the balance of the year. 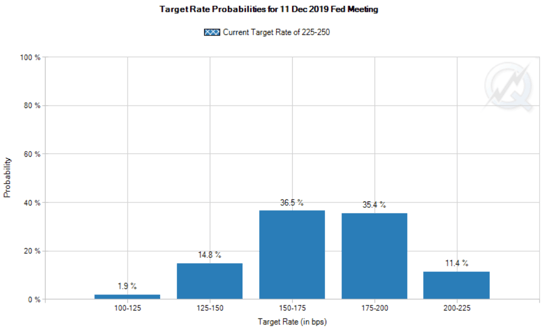 Any movement by the Fed away from cutting rates as deeply as had recently been expected would see the greenback rally – which may already be happening.

We must also note the ascension of Boris Johnson to the prime-ministership of the UK.  Mr. Johnson, with his characteristic blonde ‘moptop’, may be just the person to finally unravel this whole tiresome BREXIT business. The former mayor of London leads a minority Conservative Party, with the next election not scheduled until May 2022, and has vowed to leave the EU, deal or no deal, on October 31st of this year. Unlike Theresa May, who struggled to maintain the UK negotiating position by stating she would not walk away from the talks and requesting extensions, Mr. Johnson has stated that October 31 is the deadline and that he is quite prepared to walk away from a poor BREXIT deal. That leaves just a little over three months to work out a deal, all while Mr. Johnson’s minority government faces a possible non-confidence vote sending the country to an election. GBP ended up losing ground against the USD, but not as badly as some other members of the complex.

The Euro Zone is facing a major manufacturing slowdown in its two largest members, co-founders France and Germany. The following graphs are illustrative:

At their meeting last Thursday, the European Central Bank left rates unchanged but made clear its intent (decision?) to lower rates. In its remarks, the governing council stated that administered ECB rates will continue as is or lower over the course of the next twelve months. Once again, the ECB revealed its (misplaced) concern with low inflation, announcing that the Bank would focus its efforts on pushing inflation towards its desired 2.0% range.  The recent Franco/German PMI numbers, sitting at 50 in France and well below that in Germany, have apparently convinced ECB boss Mario Draghi that further stimulus is required. A replay of quantitative easing (QE II) may commence as early as September, further distorting the bond market’s yield curve. The EUR lost ground on the week as players waited for the Fed’s upcoming rate announcement and some further news on UK and BREXIT.

Incoming ECB chief Christine Lagarde has signalled her decision in favour of further cuts to key ECB rates, as well as further rounds of QE, to provide further ‘stimulus’ to the zone economy. This all ties in with our recent note about negative-yield bonds, a monstrosity currently growing in size. Currently, $13.2 trillion USD of sovereign debt is in negative yield territory, and this distorts customary notions of saving and investing. A good example is Switzerland, where the entire government bond yield curve trades at a negative yield, all the way out to 50 years! The benchmark Swiss 10-year is a good example, currently yielding -0.69%.

With the ECB set on further ‘stimulus’ in pursuit of higher inflation – a far cry from the days of inflation hawks at central banks – likely more government bonds will fall into negative-yield territory. Some analysts have even called for the global benchmark US 10-year bond to hit 0.00% yield in the near term. All of this is to say that global central banks, having arrogated to themselves the right to set prices once determined by market forces, may have taken all this to an extreme conclusion. How this will ultimately affect exchange rates is anyone’s guess: we really are in uncharted territory.

The coming week sees a critical May GDP release in Canada along with the all-important US jobless numbers for July. The Federal Reserve makes its rate announcement on Wednesday.