(noun: a loss or lack of balance)

For the past several weeks, as noted in our recent newsletters, it was all so easy. So predictable. Most central banks were in dovish mode, the Federal Reserve had cut once and made clear it was ‘one and done’, while the Bank of Canada maintained overnight rates at their current levels and dismissed any talk of easing. The Sino-US trade war seemed to have faded into the background and investors assumed that cooler heads had prevailed, that a deal was upcoming which would right the distorted trade dynamic between these two countries while allowing the Chinese to save face – an important consideration. It all seemed so clear, so predictable… that is until Donald Trump, perhaps the most mercurial US president ever, announced a new 10% tariff on over $300 bil. worth of Chinese exports to America. So much for balance, for equilibrium. Let’s take a look.

To begin, we’ll briefly review the two economic statistics of note released last Friday in both the US and Canada. US July PPI (wholesale inflation) came in muted, rising +0.2% as expected, while the core rate (ex-food & energy) declined -0.1%, missing the call of +0.2%. Essentially, it was a non-event for investors.

On the other hand, Canadian July employment numbers disappointed strongly while also appearing self-contradictory. The headline jobs numbers showed a loss of -24.2K positions (FT -11.6K/ PT -12.6K) with an overall loss of -69.8K private sector jobs (!). Public sector hiring and self-employment largely offset those losses. The jobless rate also rose to 5.7%, above the call of 5.6%.  What was puzzling was the rise in hourly wages of +4.5% (call +3.8%) while employers were apparently shedding workers en masse. Mr. Market  whacked the loonie, the idea being that the Bank of Canada might feel compelled to join other central banks in easing rates, thus reducing the attractiveness of the CAD.

Regardless, after an initial knee-jerk selloff, the CAD rallied back to its opening level, as a consensus emerged that the Bank would sit tight in light of strong wage growth despite the loss in jobs. The Bank likely wants to see some resolution of the ongoing US trade war with China and BREXIT before it reassesses its outlook and, at any rate, Canadian jobs numbers have been quite strong this year. Some giveback was inevitable.  BOTTOM LINE: This may lead to further CAD strength in coming weeks as other central banks continue easing. 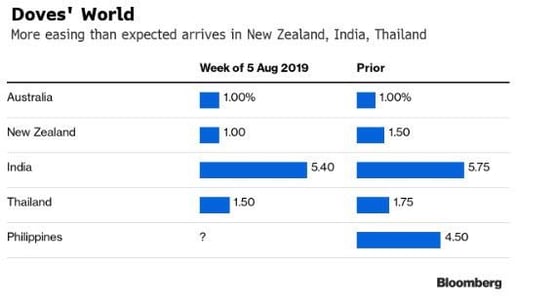 Following the American announcement of increased tariffs, several Asia-Pacific central banks cut their overnight rates in anticipation of a trade-related economic slowdown. Tuesday overnight, the Reserve Bank of New Zealand cut an aggressive half-point while market players had called for a quarter-point cut. The Reserve Bank of India moved 35 basis points (an odd amount) while the Thai central bank cut a quarter-point. Investors believe Australia may be next, given its exposure to China and the ongoing desire between both the Kiwis and Aussies to keep their rates roughly aligned.

The net result of all this in global markets was a massive ‘risk-off’ move, as players sold equities and moved into treasury bonds. At one point during the sell-off, the DJIA dropped over 600 points and is still well below its recent record levels. On the other hand, fixed-income assets (read: bonds) rallied sharply as panicked traders bid up bond prices, thus seeing yields decline just as sharply. A good example is the 5-year Canada bond, trading near 2.50% last November and recently in early July trading 1.60% yield, rallying all the way down to under 1.25% last week. That is major! 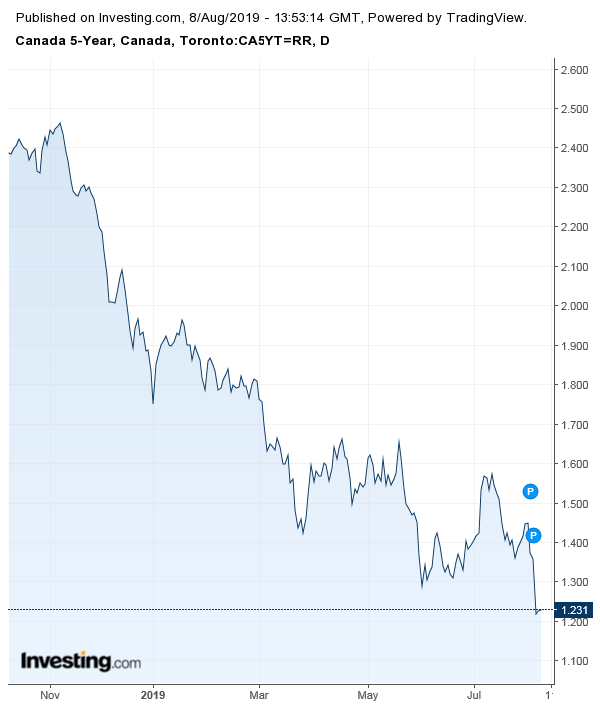 While most central banks, including the ECB, the Bank of Japan and the Bank of England, appear set to continue on a dovish course, the two North American central banks may be bucking the trend. The Bank of Canada will leave rates unchanged as outlined above, whereas the Fed finds itself in a quandary: to cut or not to cut?

Reasons Not to Cut:

Elsewhere, news out of the UK indicated further weakness in the domestic economy, as Q2 GDP posted a decline of -0.2% versus analysts’ call of flat.  GBP remained weak in response, as the ongoing BREXIT issues and the looming deadline of October 31st continued to weigh on the currency. Last Friday, reports emerged from London that 10 Downing St. had cancelled all staff leaves, leading to speculation of a possible snap election ahead of the BREXIT deadline. PM Boris Johnson, sitting at the head of a minority Conservative government, may be seeking a firm mandate from the voters, casting the election as LEAVE (Conservatives) vs REMAIN (Labour), essentially re-doing the original BREXIT plebiscite. Unsurprisingly, sterling was one of the losers on the week.

On a final note, the recent strong rally in bond prices (and corresponding decline in yields) has raised the troubling possibility of negative bond yields appearing in both America and Canada. It is entirely conceivable that, with around 14.0 trillion USD of global sovereign debt (or 25% of the total) now in negative yield territory, this monstrosity will soon arrive on these shores.

The coming week sees just a handful of tertiary economic statistics in Canada. America, on the other hand, sees a good mix of secondary numbers including Retail Sales for July, which may be worth a closer look given the rather gloomy atmosphere nowadays. No Fedspeak is scheduled.