Last week saw the all-important employment numbers released in both Canada and America.  At first glance, it appears that the US and Canadian economies are going in different directions, but that may not be the case.

Let’s begin with the US jobs statistics.  It’s becoming increasingly clear that the US has achieved near-full employment.  Last month, the economy generated a total of +213K new jobs vs the call of +200K.  The previous two months (April/May) were bumped up a total of +37K jobs, and the unemployment rate rose to 4.0% from the previous 3.8%, well above the call of 3.7%.  The workweek held steady at 34.5 hours, and wages rose +0.2% monthly vs the call of +0.3%.  There is a lot of white noise here – what’s the bottom line?  One encouraging fact is the rise in the unemployment rate, indicating long-discouraged workers are now re-entering the labour force.  What is not so encouraging is the near flatlining of wages.  There have been anecdotal reports of employers having great difficulty in finding qualified workers, or so they claim.  An obvious means of attracting more qualified prospective employees is to raise wages – which is not happening.  Until it does, the economy will likely continue creating jobs at the current pace, the economy will continue on a modest growth path and the Federal Reserve will continue on its slow rate normalization path.   As a result, traders bought equities and bonds while selling off the greenback, making it the loser on the week. 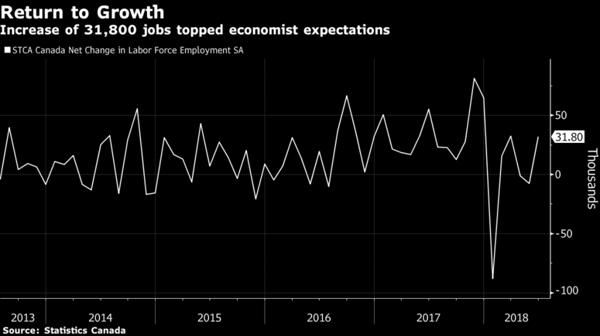 In the True North, by contrast, job growth accelerated and wages are rising at levels not seen stateside. June wage growth clocked in at +3.6%, down from May +3.9% but still impressive. The economy generated a total of +31.8K jobs, well above the consensus of +23K, while the rate rose to 6.0% from the previous month’s 5.8%, which was also an analyst’s call.  The jobs breakdown was: Full-time +9.1K/Part-time +22.7K.  The rise in the jobless rate, while encouraging in that many workers have decided to resume their search for employment, may serve to moderate wage gains going forward.   That said, the Bank of Canada will likely raise its overnight rate a quarter-point next Wednesday.  Mr. Market rallied the loonie a bit, but not that much, as trade tensions continued to overhang CAD.  In fact, despite a reasonably strong economy, Canadians are fretting over the NAFTA issue.   A Bloomberg/Nanos consumer confidence survey ending in June showed a score of 54.9, the lowest score since March 2016, as concern grew over the spectre of a trade war with America. 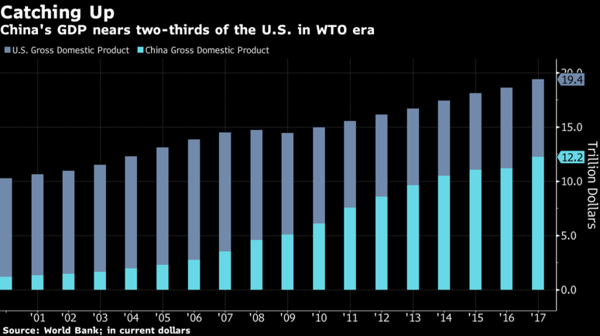 Starting from well back, the mixed command/demand economy of China has grown impressively since 2000.  The above graph encapsulates this growth versus America clearly and may very well explain much of the concern among American policymakers.

The Eurozone has been quiescent in recent weeks, aside from the challenge to Chancellor Angela Merkel from her coalition partners in Germany and the recent to-do over refugee acceptance by zone members – a family quarrel Ms. Merkel had at one time appeared to be losing.  An agreement was finally forged among German coalition partners to keep Ms. Merkel in charge, but the political damage to the zone boss may be lasting. Moving south though, once again Italy, the zone’s No. 3, is the main source of concern. Aside from having recently placed in power a populist party and several eurosceptics in positions of authority, the Italian debt situation appears quite precarious: 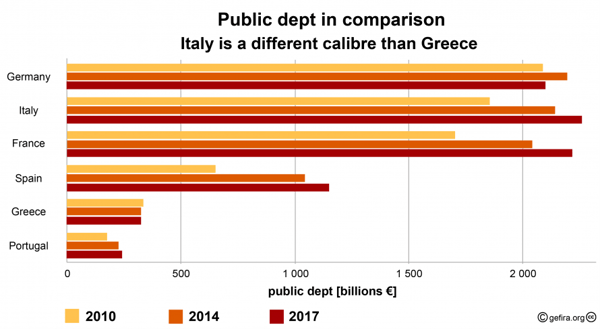 Admittedly, this is a quite boring issue, but ignoring it is unwise. Italy’s economy has been stagnant for ten years – since the Panic of 2008 – and the new government is committed to spending programmes which, needless to say, will not reduce its staggering debt load.  Much of this debt is owned by Italian banks and insurance companies whose own financial position is not strong, to say the least.  With the ECB ending its QE programme of bond-buying later this year, bond yields have already started rising in the zone. Italy’s crushing debt, despite government budget surpluses, leaves it in a precarious spot.   As the graph above makes clear, Greek debt restructuring of a comparatively small amount was a huge issue several years back. Italian debt restructuring would be unimaginably complex, and not exactly a positive for the EUR. Or the zone itself, for that matter.

The coming week sees many secondary US economic releases, a handful of Canadian numbers along with the Bank of Canada rate announcement this Wednesday.