Don't Bank On It

This past week was dominated by developments in the crude oil market and, yet again, central bank-speak. Amazingly enough, there were also economic statistics for both Canada and the US indicating that, while the ten-year expansion may be aging, it still has some life left in it. Let’s dive in and take a closer look.

In the US, August Industrial Production topped analysts’ estimates at a strong +0.6% vs call of +0.2%, while August Capacity Utilisation rose to 77.9%, beating the consensus of 77.6%. August Existing Home Sales rose +1.3% vs call of a decline of -0.9%, with an annual sales rate at a solid 5.49 mil. units, well above consensus of 5.37 mil. The widely-watched Philadelphia Fed Index came in at 12.0 for September, registering a decline from the previous 16.8 but topping the street’s call of 10.5 – not bad!

While these measures are admittedly second tier, still they indicate continued vitality in the US economy. Additionally, with home sales rising, American consumers – working steadily with rising wages – appear willing to take on mortgage debt. When average Joe’s are eager to spend, it’s great news for the global economy.

In Canada, inflation numbers came in largely as expected. August CPI mth/mth came in at -0.1% vs call of -0.2%, while the annual rate came in as expected at 1.9%. The latter is in line with the Bank of Canada’s inflation targets. Consumers appear to be retrenching slightly; however, as July Retail Sales disappointed, the headline number at +0.4% lagged the call of +0.6%, while ex-autos fell -0.1% (well below the consensus of +0.4). 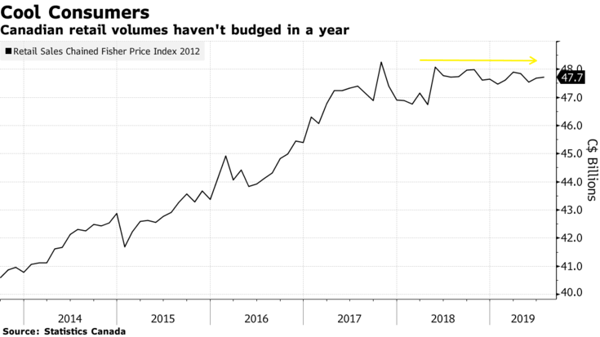 We will now examine the Federal Reserve and its actions last week, but first let’s look at some US economic graphs to put things into context (with many thanks to our learned colleagues Dr. Long and Mr. Short) 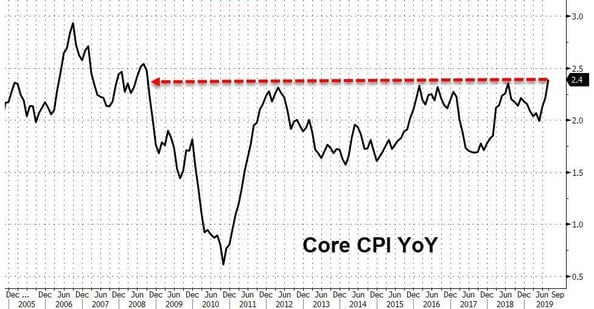 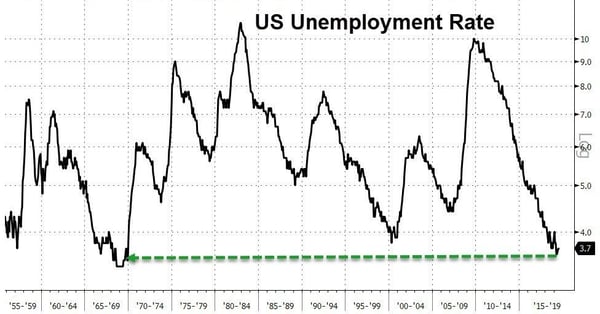 Jobless Rate at a Low Not Seen in 50 Years

As the three graphs above demonstrate rather clearly, the US economy appears to be doing quite well by almost any measure. Still, the Federal Reserve felt compelled to cut the overnight fed funds rate (now 1.75% - 2.00%). Recent pressure from the Tweeter-in-chief may have had something to do with it (although the Fed has never acknowledged that), but market expectations had priced in a quarter-point cut as a certainty. Regardless, the FOMC was divided, with the vote to cut 7-3; the two dissenters, Esther George and Eric Rosengren, voted to hold steady while James Bullard voted for a half-point cut.  Yet of all FOMC members, not one expected more than one further rate cut in the future – which is rather hawkish.

The Fed noted that household spending had remained strong while business capex had fallen off, exports as well, indicating the ongoing Sino-US trade war is continuing to depress the outlook of many firms.

On the technical issue of overnight repurchase funding (which blew up last week) the Fed remained mum. Repurchase funding (repos) has not been used since the Panic of 2008, when the Fed started buying bonds outright, but a liquidity crunch last week compelled the Fed to dust off its repo tools. 75 bn USD was allotted and quickly over-subscribed, and the issue has continued to drag on. Speculation now is that the Fed may use this funding issue as a reason to re-introduce Quantitative Easing without actually saying so. This week sees a 45 bn USD treasury refunding, so something will have to give.

Lastly, let’s take a brief look at oil. The whole world knows about the attack on Saudi production facilities early last week which knocked out roughly 50% of the KSA-based plant. Early estimates were of a three to six-month delay in getting the works up and running, although recent estimates peg it now at two to three weeks, which begs the question: just how much damage was inflicted? Regardless, crude popped in price, with WTI surging from $55.20 USD/barrel opening on September 13 to a peak of $62.13 USD/barrel opening on September 17. Last trade was in the $58 USD range, so there has been some giveback, although the ease with which these facilities were attacked will likely see a permanent risk premium tacked on to crude prices. As to who was responsible: that is beyond the scope of this newsletter.

The coming week sees a complete dearth of Canadian economic stats, while America sees a good mix of data along with a deluge of Fedspeak.