Act II: It's Not Pretty

I’m located in Toronto, Canada, where I’ve just completed my third week of “social distancing” and working from home. Shelter-in-place orders are being encouraged by every level of government nationwide. Listening to our health and government leaders, it sounds like I will be here, living and working from my home, for at least another month.

Act I of the COVID-19 pandemic has played out. The “shoot first ask questions later” deleveraging of assets caused the Federal Reserve and other central banks around the world to move aggressively to ease the disruption in the financial markets. This was followed up by large fiscal support by governments around the world (ranging between 4 to 10% of GDP) to support workers, households, and businesses that have been affected by the economic disruption of the pandemic.

Let’s be clear: none of these measures are stimulus, they are bailouts of the financial plumbing. The actions of the Fed are not a stimulus, but they have kept the “lights on” by providing liquidity in money market funds, primary dealers, commercial paper, muni bonds, and corporate bonds. The fiscal spending by governments here and abroad is also not stimulus. The funds are going to replace some (not all) paychecks and revenue lost due to the economic disturbance.

The USD initially rose in the rush to get liquid, just the way it always does in any crisis. By all accounts, there is roughly $14 trillion in USD-denominated debt held by non-US firms.  When a worldwide sell off occurs across all asset classes, margin clerks demand more margin. This causes those non-US firms to sell their domestic currency to buy USD in order to satisfy the margin clerk. Thus, at this moment, the rush for liquidity trumps the fundamentals of the currency.

Let’s think like a reserve manager of a foreign central bank for a minute. The Fed has just embarked on another round of money printing, on top of the last one that is still sitting on their balance sheet from the 2008 crisis. The US government just passed a huge spending bill to the tune of just over $2 trillion. Doing the math, the current US deficit is just over $1T, plus the new spending bill of $2T, for a total of $3T. The government will have to issue bonds to finance this. Who will buy all this debt? The answer is the Fed.

Interestingly, in that bill there is $420 billion earmarked for the Treasury, which will be transferred to the Fed. The Fed will leverage that 10 to 1 so that they can increase their balance sheet by $4.2 trillion. Therefore, the Fed should be able to monetize the debt and whatever else the government comes out with on the fiscal side. Faced with this, the reserve managers at foreign central banks will likely decide to sell their US Treasury holdings. It has already started; central banks dumped more than $100 billion in treasuries in the three weeks to March 25, and it is on track to be the biggest monthly drop on record. 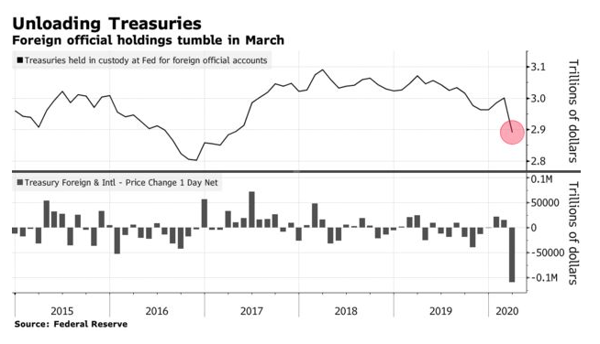 We’ve heard it before: deficits don’t matter, and money printing doesn’t matter either.  Like we said earlier, for now, the $14 trillion margin call trumps the fundamentals of the currency. At some point in time, that will change.

The Fed has done its part and stopped it from being a financial crisis. We are now entering Act II of the COVID-19, for the health crisis along with the economic crisis. On the health side, the case count and deaths will accelerate until we pass the peak of the curve. As for the economy, there has been a massive drop in demand for product and services due to consumers being asked and forced to stay home. The economic news is starting to trickle in, and it isn’t pretty. Last week saw the release of manufacturing and service PMIs from around the world and various regional bank and manufacturing surveys. There’s no need to dive into the data of each one because the end result is the same – everything is down.  All of them displayed a sharp drop off, of whatever it was measuring, and they all looked like this. 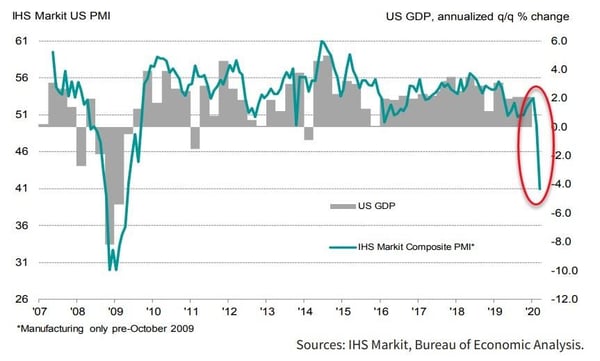 The employment picture didn’t look good either as shelter-in-place measures caused many workers to file unemployment claims. US initial jobless claims hit a record high of 6.6 million last week, on top of the previous week of 3.3M. These numbers are low and do not reflect the true nature of the hardships, which can be seen in Canada’s data. Canada has processed 2.1M jobless claims benefits in the past two weeks. That's a full 10% of the workforce and would correspond to 21 million job losses in the US in the same period.

In the week ahead, oil will be the big story and with it the USD/CAD rate. The oil price war may be coming to an end. Last Thursday, President Trump said that he spoke with the Saudi Crown Prince and hoped/expected that Saudi Arabia and Russia would “cut back approximately 10 million barrels, and maybe substantially more,” sending oil prices soaring by 20%. Then on Friday, the Saudis called for an emergency OPEC+ virtual meeting for Tuesday April 7th. As of writing, that meeting has been postponed for a couple of days, likely because they need more time to negotiate between all the relevant parties. The global economy was already slowing down due to Trump’s Trade War, and with the onset of the pandemic, daily oil demand has shrunk from around 35 million barrels per day to about 20. Storage is not months but weeks away from filling up. Thus, the only rational solution is for an agreement to curb output before the market does it for you. 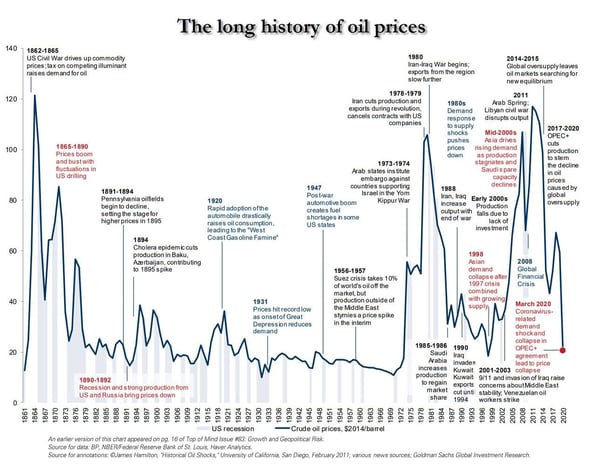 A symmetrical triangle has formed on the 1-hour USD/CAD chart, with the top of the triangle being formed on March 18th and the bottom set on March 29th. The rate will approach the apex of the triangle on Monday, forcing it to break up or down. If the market thinks that an agreement to cut oil output is in the cards, then the rate will likely go to 1.3920 or lower to the next support band at the 1.38 level. If there is no agreement, then the rate may break higher and challenge the 1.4350 level.

Finally, I’ve been touched by the outpouring of gratitude for our front-line health workers.  The Balcony Applause has taken off all around the globe, as people under lockdown have decided to show their appreciation for all front-line health workers fighting this invisible enemy by going to their balcony and front doors at a pre-appointed time and applauding.  This pandemic is a war, and healthcare workers are our soldiers. We all continue to be inspired by their service and bravery.