The week past saw no economic statistics of note in Canada whereas, in America, there were some interesting inflation measures released and not much else.  In reality, central bankspeak from both the Federal Reserve and the Bank of Canada demanded the attention of market participants.  Let’s review the numbers and parse what our betters had to say about the overall North American economy.

To begin with, US inflation numbers, like most inflation measures in the advanced countries, were muted – to a degree. Core PPI at the wholesale level rose 2.3%, above the call of 2.1% while core CPI at the retail level rose 2.1%, again beating the consensus of 2.0%.  A touch higher, but not much, well within the range seen in recent years and still around the 2.0% level.

In remarks to congressmen last Wednesday and Thursday as part of the Fed’s mandated twice-yearly appearances on Capitol Hill, Fed chief Jerome Powell made clear that the Fed would act to cut rates ‘pre-emptively’ in defense of the US expansion.  He cited ongoing trade disputes and an increasingly-evident global slowdown as justification for this dovish view.  Traders had been in a quandary following the strong employment numbers seen earlier this month, as markets had been pricing in up to three rate cuts by the Fed before year-end.  A quarter-point cut on July 31st appears certain; further cuts will be determined by economic data to come.  And players hit the greenback without hesitation, making it the loser on the week.

The Fed also appears, in our view, to be overly concerned by persistent low inflation.  As can be seen above, inflation was out of control in the late 70s and early 80s (and we well remember it).  The bond market had essentially gone on strike at the time, pressuring central banks to do something about the untenable inflation situation.  And central banks were highly successful, stuffing the inflation djinni back in the bottle.  And now they are toying around with quantitative easing and negative interest rates and the like to get a little inflation back in the system.  That bond markets are taking this with equanimity we find quite puzzling.

Playing Jeff to the Fed’s Mutt, by contrast the Bank of Canada last Wednesday left overnight rates unchanged, while putting forth a generally upbeat assessment of the domestic economy.  The rate was left at 1.75% and the BOC made clear it is staying there for now. 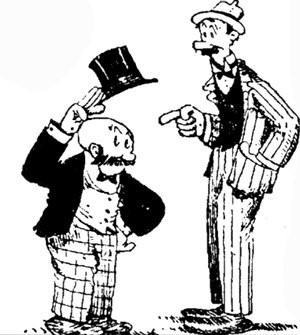 The BOC revised upwards its growth expectations for the economy, raising its estimate of Q2 growth to 2.3% from the initial 1.3%.  It cited a surge in crude exports, increased consumer spending and a rebound in exports as the basis for its optimism.  A positive trade balance doesn’t hurt either.  All of this implies the BOC sitting tight for an extended period while the Fed may be busy cutting rates going forward.  Mutt & Jeff indeed!  Mr. Market was most impressed, buying the loonie in response, taking the unit to a 2019 high last Friday.  The CAD may be poised for further gains.

In the Eurozone, the powerhouse German economy continues to slip, with BASF – possibly one of the best-known companies in the world – issuing a profit warning.  Investors digested this news and promptly started hitting the likes of BAYER and Lufthansa in anticipation of similar earnings disappointments.  The next rate decision from the ECB is slated for July 25th, and the bank appears set, once again, to engage in quantitative easing (QE) in an attempt to drive rates down further and into negative territory, both (allegedly) to stimulate the economy and to give some energy to inflation. The latter currently sits at less than 2.0%, the Bank’s target.  So now it may be a race between the Fed and ECB under new boss Christine Lagarde – who has signaled support for bond purchases and negative yields – over who can cut the most with the best results.  On that basis both the EUR and the USD may be tied.

It goes without saying that negative interest rates are a complete inversion of capitalist investment. A should not have to pay B for the privilege of lending money to B.  And the fact that negative rates have been tried and, in the recent past, found wanting, should prod central bankers to try a new approach.  But they don’t.

The coming week sees a good mix of economic statistics in both Canada and America, along with a heavy schedule of Fedspeak.