The USD had a stellar week, driven higher day after day by official Fed rhetoric, and only falling on Friday afternoon after Fed Chair Janet Yellen spoke setting up a classic take profits move on the buy the rumor sell the fact event.  The CAD took the brunt of the losses on the week, falling three cents despite healthy GDP growth in Q4.  The Canadian economy expanded 0.3% in the month of December, pushing the annualized pace of growth to 2%. While this was in line with expectations, the year over year growth rate and the quarterly growth rate beat forecasts.  Q4 GDP growth was 2.6% instead of the 2% forecast and Q3 growth was revised up to 3.8% from 3.5%.  However, these numbers were not enough to overcome the Bank of Canada’s dovish bias.  The BOC left rates unchanged, as expected, but it reiterated that there was persistent slack in the economy, subdued wage growth, and that exports continued to face ongoing competitive challenges.  Furthermore, the BOC said they would look through the temporary effect of higher oil prices thus leaving the door open to additional easing.  Meanwhile, the NZD was also down over 2% on the week in spite of the fact that Reserve Bank of New Zealand Governor Wheeler was slightly less dovish than the previous week as he expressed the risks around future rate moves as equally balanced.

A sharp short squeeze at the end of the week propelled the euro to the top of the heap.  The catalyst for the move was a French presidential election poll that showed Emmanuel Macron overtaking the anti-euro candidate Marine Le Pen for the first time.  Macron’s support jumped 2 points to 27% from a week earlier in an Odoxa survey of first-round voting intentions while Le Pen slipped to 25.5% from 27%. 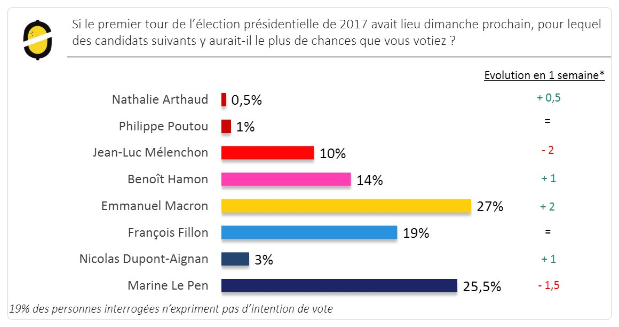 Be that as it may, the week really belonged to the USD.  King dollar steamrolled most of the major currencies from Monday to Thursday as it broke key levels all around.  The catalyst for the move was official Fed rhetoric by current Federal Reserve members:

As a result, the March rate hike odds have soared from about 40% the previous Friday to just over 90% by week’s end.  This is significant because the Fed usually hikes only if the market prices in at least a 70% probability of such an event.  Thus, for the first time in a long time the Fed has managed to steer rate hike expectations its way not the other way round.

The Fed may be ignoring the signs of a sluggish start to the year.  We pointed out a couple of weeks ago that the divergence between survey data and hard data remains unresolved.  Furthermore, the key inflation data has hardly presented a compelling case for monetary-policy tightening. Also, the broad data picture has been more indicative of an economy that could probably cope with a hike rather than one at risk of overheating and in need of tightening.

To us, the barrage of hawkish comments doesn’t seem to have clarified the Fed’s plan.  In truth, the comments don’t look materially different from the recently released minutes from the February 22 FOMC meeting, in which it was revealed that “many participants” [Fed members] wanted to raise interest rates “fairly soon.”  Of course, all of these statements could be merely trial balloons to test the market's preparation for an upcoming rate hike.

The situation reminds us of the buildup to the June 15 2016 FOMC meeting.  If you recall, there was hawkish rhetoric then, however there was also a great deal of uncertainty over the Brexit vote on June 23 2016.  The Fed decided to error on side of caution and didn’t raise rates.  This month is shaping up in a similar way.  The FOMC meeting is on March 15 and there is a whole lot of uncertainty in the remainder of the month.  On the same date of the FOMC meeting the Netherlands hold a national election which could install a less than friendly EU party.   Also, a couple of days later, the USA is set to reach its debt ceiling - in the past, the raising of the debt ceiling has been used by Congress to try to get concessions from the President.  Moreover, on March 17-18 the G20 finance ministers and central bankers will meet – this may be very uncomfortable for the new Treasury Secretary Mnuchin with the administration’s protectionist trade and currency views.  Last but not least, the UK is set to formally trigger Article 50 which will start their divorce proceedings with the EU.  Furthermore, not in the month of March, but equally filled with uncertainty, is the looming French elections, which will start in April with the final runoff in June.

In our estimation, the Fed’s best move would be to forgo a March rate hike and instead hike at the May meeting.  As it stands now, Mr. Market assumes that Fed action would take place at the quarterly meeting that had the economic forecast updates and was followed by a press conference.  Thus, Mr. Market believes that a Fed hike would only occur at the March, June, September, and/or December meetings.  So the best strategy for the Fed would be to hike in May – this would allow the Fed to turn every FOMC meeting on the calendar into a “live” meeting.