The past week was relatively quiet in the markets, with an overdue bounce in the USD and some interesting political developments as well as some key statistics and central bank-speak out of Canada. In no particular order, we’ll take a closer look.

In the True North, the Bank of Canada held rates steady at 1.25% as expected with an accompanying statement somewhat more dovish than anticipated. Our learned colleagues Dr. Long and Mr. Short exercised their unique talents and picked out the salient points:

Additionally, the BOC remarked that growth in exports – a sector closely watched – appears to be struggling with capacity constraints, uncertainty about trade policies and competitiveness challenges. (This last point can be read as a strong CAD). This was enough for Mr. Market to sell the loonie hard, even with firming oil prices. (More on oil below)

Despite recent strength in payrolls, the Bank appears to lack confidence in the domestic economy, and wading through its statement reveals a concern about weakening inflation. Inflation numbers released last Friday may confirm that view, as March CPI came out +2.4%, below the market call of +2.5% although higher than the previous +2.2%. Perhaps the Bank feels that the expansion can continue without igniting inflationary pressures. Additionally, March retail sales were mixed, with the headline number at +0.4% as anticipated, but ex-autos was flat vs the call of +0.4%, indicating Canadians bought new cars but not much else.

In the Land of the Free, a lack of any major economic releases or developments left markets somewhat aimless. March retail sales at +0.6% beat the call of +0.4%, and ex-autos rose +0.2% as expected, but that was largely it. Trade issues had recently been spooking players with talk of tariffs and trade wars dominating markets, but it now seems clear that any new tariffs will not be applied just yet. As we remarked in a recent blog – don’t listen to what Donald trump says, watch what he does. Advice investors appear to be heeding, as equities gained ground last week. USD picked up as well, as investors engaged in some profit-taking buying back shorted greenbacks. 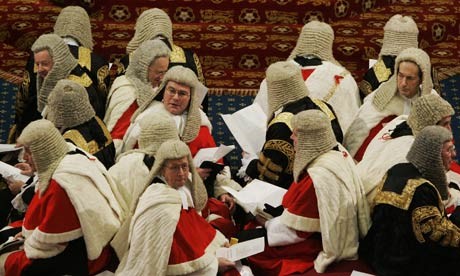 What do the rabble want NOW?

In the UK, the House of Lords threw a spanner into the works, voting to amend BREXIT legislation to require that ministers clarify steps taken to negotiate an arrangement enabling the UK to continue participating in a customs union with the EU. Such a requirement would limit the UK’s ability to forge free-trade deals elsewhere, and may even call into question the whole BREXIT business entirely. This was a sharp defeat for PM Theresa May, and not the first one either. However, the House of Lords, like Canada’s Senate, is an appointed body, not elected, and the political fallout will likely stress that fact. Regardless, investors were not impressed, and GBP was a major loser on the week.

We haven’t taken a look at oil recently – everybody’s favourite commodity. With recent weakness in the greenback, crude prices had firmed and actually rallied sharply on last weekend’s Syrian airstrike, and just as quickly pulled back. However, crude prices recently traded at the highest levels since December 2014 and may be poised to continue rallying. Remember OPEC and its attempts to restrict supply? For once, the cartel may have succeeded. 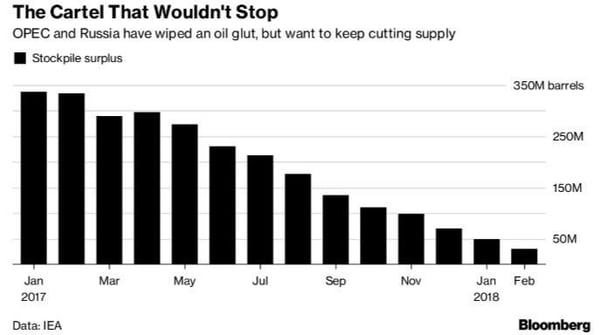 At the same time that the OPEC partners have succeeded in driving down the glut of oil depressing crude prices, American stockpiles have declined to the lowest in three years:

The upshot of this ‘inventory clearance’ is twofold: one is higher prices all through the supply chain and refinery products including gasoline, and the second is USD weakness in response to commodity price strength. Rising crude prices should be good news to western Canadian oil sands producers, who have been struggling with low prices, and to the loonie as well. However, given the Bank’s concern about soft inflation and difficulties faced by exporters, a waxing CAD may not be an entirely welcome development. 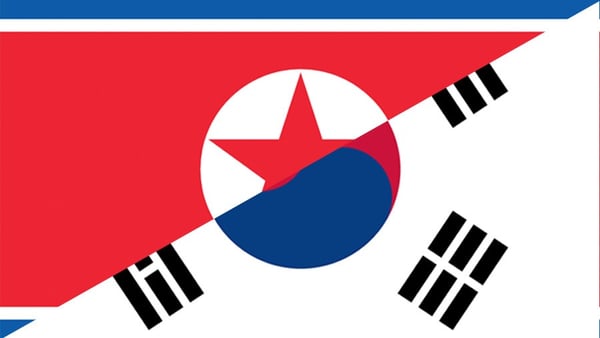 News reports that North Korea and South Korea may finally end their 68 year war was taken as a very positive development. Events in that region are moving quickly. Although China was the likely instigator, we can’t help but feel that Donald Trump’s insistent prodding may have had something to do with it, given that previous US administrations have had little, if any, success in dealing with the Hermit kingdom. Regardless, the possible normalisation of one of the world’s last remaining Stalinist states is very good news.

The coming week sees a near-total dearth of Canadian economic news, whereas stateside has a packed calendar.