It so happens that Friday was quadruple witching, which occurs on the third Friday of every March, June, September and December. On these days, the contracts for market index futures, market index options, stock options and stock futures expire, usually resulting in increased volatility. On top of this, we had three key central bank announcements from the C3 (US Federal Reserve, the European Central Bank and the Bank of Japan). Just as investors struggled to make heads or tails of the week's central bank moves and the counter-intuitive market reactions that they spawned we were reminded about the trade wars. On Friday, President Trump decided to ratchet up trade tensions with another round of trade tariffs on China. These four drivers were the catalyst for the forex market’s version of quad witch week.

Let start with the Fed, they hiked rates by a quarter point, which was already baked in the cake so no surprise there. One of the policymakers decided to move one of his dots in the dot plot which signals that the Fed is signaling that another two hikes in second half of the year is now appropriate. Here is the headline stream from the news services:

Here is the shift in the dots that tipped the balance for another rate hike in Q2 for a total of 2 more hikes:

This caused traders to lose their breakfast as the USD shot up across the board, causing treasury yields to rise by 2-3bps across the curve and US stocks to drop to their daily lows. However, Chairman Powell was able to walk the traders off the window ledge during his press conference. He quickly reminded them that the Fed’s current stance was still accommodative and that it would remain data dependent, thus there was no need to over react. This caused the USD to give up its gains – so a slightly more hawkish Fed produced a USD sell off (there’s a head scratcher).

Next up was the ECB, its statement was rather more hawkish than expected. It announced a reduction of its bond buying program from 30 bln a month to 15 bln a month for the last quarter of the year and end the program completely at year end. It also confirmed that it would continue to reinvest the proceeds of maturing bonds for an extended period, just as the Fed has done. The ECB did make some tweaks to their forecast, reducing 2018 GDP to 2.1% from 2.4% while lifting the inflation number to 1.7% from 1.4% for 2018. Of course, this caused the euro to shoot up but then came the Draghi curveball. Here is the headline stream from the news services:

On top of all this, in his presser, Draghi pushed back the timing of the first rate hike to “at least through the summer of 2019” – the euro reversed course and plunged. Wow, Draghi's 8-year term as ECB president ends in October, 2019 – he could actually go out without ever raising interest rates in his term.

On Friday, it was the BOJ’s turn, no surprise here as they left policy rates unchanged and maintained their JGB holdings target. Here is the headline stream from the news services:

Here again, the counter-intuitive response emerged and the yen went up not down. While the BOJ did manage to downgrade their inflation outlook they made no mention of its ongoing 'stealth' bond-buying taper. Its stealth, however it is not by design – they just can’t find any bonds to buy, which is another story in itself.

The other major central bank is getting ink here for what it didn’t do. The People’s Bank of China, which had raised rates by 5 bps after the last two Fed rates hikes decided to do nothing. It looks like it was the right decision for them, since it turns out, that the Chinese economy is cooling ever so slightly (we hope that’s all it is). Industrial output growth slowed to 6.8% from 7.0%. Fixed investment rose 6.1% from a year ago, less than the 7% that was expected. Retail sales fell to 8.5% from 9.4%, when an increase was expected. And lastly, China's broadest monetary aggregate, the Total Social Financing, posted its smallest monthly increase since July 2016, confirming a sharp slowdown in shadow banking activity. 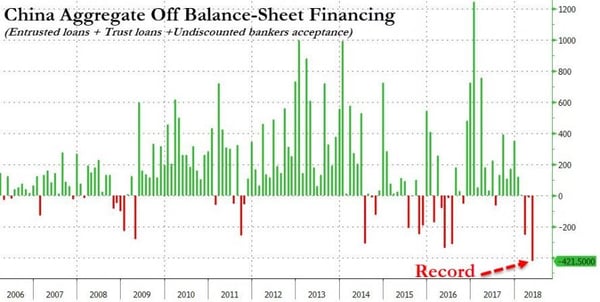 And finally, I think its official; Trump has his much desired trade war on his hands. On Friday, the Trump administration laid a 25% tariff on 818 Chinese goods with a total value of around $50BN. This is on top of the steel and aluminium tariffs on many of the US allies. It didn’t take long for China to respond - “China will immediately introduce countermeasures of the same scale and strength,” an unnamed Chinese commerce ministry spokesperson announced on the ministry’s website. Here is the headline stream from the news services:

This isn’t over by a long shot. How do we know this? Because the US fully expected China to retaliate, which is why the Trump administration also plans on releasing a list of $100BN in goods subject to tariffs, and which can be implemented as soon as 60 days. Trade tensions just went from simmering to full blown trade war and it will get worse before it gets better. Let’s hope that all parties will quickly come to the negotiating table and hammer out a deal. If this doesn’t happen soon then we will see the tit-for-tat tariffs slowly choke off the current global economic expansion.

The clearest loser in the currency world last week was the CAD with a 2% loss. The escalation in Trump’s all out trade war with China and the consistent rumours out of Washington that Trump wants to impose steep import duties on autos has put the future of the North American Free Trade Agreement in doubt. On the weekly chart, you can see that last week’s price action has pushed the rate through the blue trend line linking the highs from January 2016, May 2017, and February 2018. Now that resistance has been broken, the next target will be 1.3350 level that was last seen in June of last year. The Bank of Canada was thought to be the next major central bank to raise interest rates but if NAFTA is cancelled then we doubt that will happen.