In the week that was, we saw a clash between two nuclear armed countries India and Pakistan; President Trump cutting his summit short with North Korean leader Kim Jong Un because of unacceptable demands from the North Korean leader to lift punishing US led sanctions; additional plot twists and turns in the Brexit soap opera; Capitol Hill testimony by Michael Cohen, President Trump’s former attorney and fixer; testimony on the China trade negotiations by US Trade Representative Robert Lighthizer in front of the House Ways and Means committee; Federal Reserve Chairman Jerome Powell’s congressionally mandated testimony before Congress; and a good old fashioned political scandal for Canada’s Prime Minister Justin Trudeau.  One would think that with all of this discord gold would be up and the stock market would be down.  In fact, you would be incorrect – the reverse happened.

Equity markets have turned up from their December lows for two reasons.  Firstly, on the understanding that Fed Chairman Powell has the market’s back – “The Powell Put” if you will.  The Fed’s U-turn was reiterated by Powell’s “patience and flexibility” mantra toward monetary policy during his Congressional testimony.  We also learned this week that the Fed is “close to agreeing on a plan” to end its balance sheet runoff, aka quantitative tightening.  Secondly, the extension by the US on a tariff freeze on imports from China beyond the March 1st deadline is understood to mean that a trade agreement is likely soon.  However, you wouldn’t come to that conclusion based on the recent testimony by Trade Representative Robert Lighthizer.

In last week’s testimony in front of the House Ways and Means committee, Lighthizer stated that it was “too early to predict” the outcome of trade talks and emphasized that any agreement must be “enforceable.”  Here are the headlines that came across our news feed:

Initially, equity markets sagged on these points but eventually rallied as the market sensed that President Trump wants a deal done.  The New York Times reported that the President has grown impatient with the trade talks, and a consensus is growing in Washington that he will ultimately accept a weak deal.  In fact, by the end of the week there was news that a 150-page document was being readied to end the nearly year-long trade war, and that the US is aiming for a mid-March meeting between President Donald Trump and China's President Xi Jinping to finalize the trade agreement.

Staying with trade for a moment, the US trade deficit of goods widened to $79.5b in December from $70.5b in November as exports fell 2.8% and imports rose 2.4%.  This is the widest goods trade deficit in US history, which is probably another reason that President Trump wants a deal done and fast. 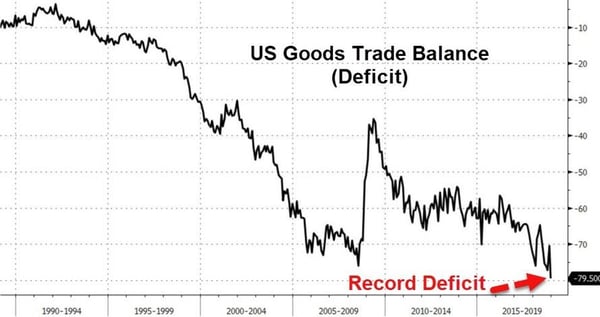 On the economic data front, we continue to get mixed messages about the global economy.  Over the last couple of months, the economic data has been inconsistent at best, but it seems that things are changing.  Last week we had a big beat for US Pending Home Sales, a substantial Chicago PMI beat, and a strong US Q4 GDP Q/Q.  Also, slowdowns in Germany and China may be subsiding.  Germany’s manufacturing PMI dropped to 47.6 from 49.7 however, the service sector PMI rose to a four-month high of 52.7 from 52.1 the previous month.  Germany’s jobless total fell far more than expected in February and retail sales surged 3.3% in January, marking their strongest rise since October 2016. In China, the Caixin manufacturing PMI was better than expected at 49.9 and better than the 48.3 reading in January.  And more importantly, China is about to set its annual growth target and other policy priorities in this Tuesday’s Policy Summit.  Look for China to signal more stimulus by trimming taxes and funneling bank loans to the private sector, rather than splurging on credit-fueled, state-led investment.

Speaking of the ongoing soap opera, Brexit supporters have given UK Prime Minister Theresa May three tests to a successful EU deal.  Pro-Brexit supporters want assurances on the so-called backstop arrangement aimed at preventing a return to hard border controls between EU member Ireland and British-ruled Northern Ireland.  In its current form, it is viewed as some kind of a trap to keep the UK in the EU indefinitely.  The EU’s chief negotiator Michel Barnier said on Friday that the EU was ready to give Britain more guarantees that the backstop was only intended to be temporary and used for a “worst-case scenario”.  This olive branch may give former opponents of May’s deal a chance to support it.  So as it stands now, there are three tests ahead – a vote on March 12th for the revised Withdrawal agreement; if that fails then the following day will be a vote on leaving with no deal; and if that fails then the following day will be a vote on seeking a formal extension.  As you can see, the odds of the so called “Hard Brexit” has receded significantly, hence the strong upward move in the GBP.

And finally, the worst performing currency last week belonged to Canada.  On Friday, Canada’s Q4 GDP was released and came in well below expectations at just 0.4% versus the forecast of 1.0%.  Adding to the CAD woes that day was the release of the Markit manufacturing PMI for February, which registered a reading of 52.6 versus the forecast of 53.0, helping confirm that the Q4 slowdown has carried over into the present quarter.  These two events caused a big bearish engulfing candle on the CAD chart.  The chart is also showing that the CAD is carving out a bearish head and shoulder pattern – a break of the neckline could cause a fall to the lows at the beginning of the year around USD 0.7330 or CAD 1.3640.  This week’s Bank of Canada announcement could be the catalyst.

With spring around the corner, it could be a great season for the USD as the dark clouds of global growth uncertainty begin to lift.  A resolution of the China/USA trade war, final Brexit agreement, potential Chinese stimulus in the pipeline, a more dovish Fed with the announcement of the end of QT, and more stimulus from the ECB in the form of a targeted long-term refinancing operation (TLTRO) could be the green shoots that help ignite the so-called animal spirits and a pretty decent reflation trade in the months ahead.