Nothing Burger is a slang term meaning something or someone that has no inherent value or substance – unfortunately the chaos in the country of Turkey is far from nothing. The economic situation in Turkey has been bubbling under the surface for months now. It started when the Turkish President Recep Tayyip Erdogan won a referendum last year that greatly expanded the presidency’s powers — which took effect after he won a new term in the June elections. He then appointed his son-in-law Berat Albayrak to run a new ministry of treasury and finance, combining what used to be the two most powerful economic jobs. In the eyes of international lenders, this move lacked credibility, stoking concerns about the independence of Turkey’s central bank; and they were right because Albayrak and Erdogan believed that lower interest rates were needed to fight inflation – not a typo, they actually thought they would be able to get away with this. Erdogan recently said, “interest rates are the mother and father of all evil”. 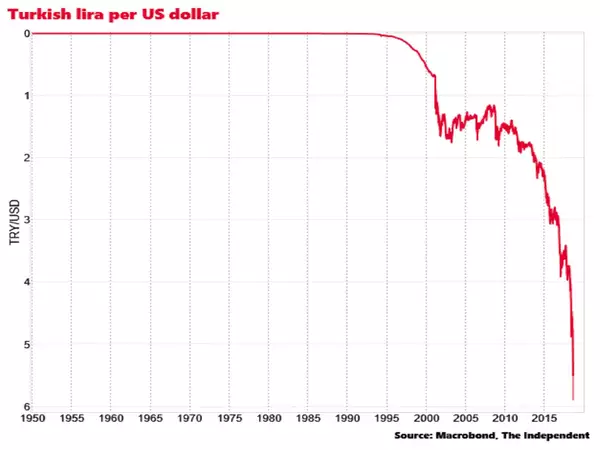 On top of Erdogan’s poorly conceived economic policies, Turkey’s other fundamentals are not economically inspiring – low savings rate, large current account deficit, and high inflation. With this backdrop, the implementation of US sanctions last week in response to the detention of American pastor Andrew Brunson has pushed Turkey over the economic cliff. The Turkish lira has entered crisis territory – it fell by a whopping 16% on Friday, 25% last week, and more than 40% year to date against the USD.  Adding insult to injury, President Trump decided to pour salt on the wound by doubling down on sanctions. The Trump administration has already picked fights with Canada, Mexico, Cuba, China, Russia, NATO, Germany, so now we can add Turkey to the growing list.

Erdogan, defiant as ever and just as combative has Trump, proclaimed that if the US continues to “disrespect” Turkey, the government will seek “new friends and allies”. So, is there anything that can break the untenable situation that Turkey finds itself in? Yes, a rate hike big enough to shock the market, coupled with an IMF bailout to backstop the country and restore foreign investor confidence. The problem is that neither of these is very likely under the current Erdogan regime.

Friday’s price action was decidedly risk off as equity markets sold off along with major currencies with the safety trade finding shelter in gold, Japanese yen, and the Swiss franc.  So why is this a concern for the rest of us – contagion risk.  According to press reports, the ECB has identified three European banks with the most exposure to Turkey:  Spain’s BBVA, Italy’s UniCredit and France’s BNP Paribas. By now we all know what happens to banks when they get in trouble – they get bailed out by governments the tax payer. As a result, the euro sold off making a new low for the year and breaking support at the 1.15 level. The euro also managed to break the neckline of a head and shoulders pattern on the weekly bar charts, which has a target of 1.05 on it. 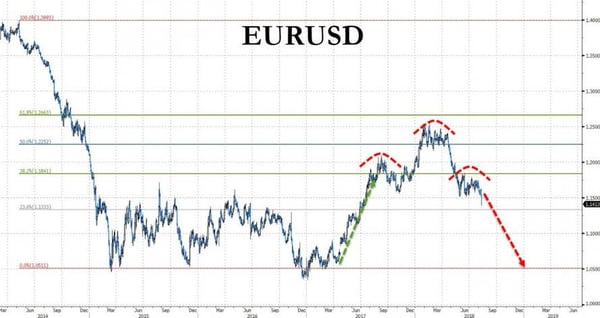 The euro wasn’t the only currency recording new lows for the year, the GBP and AUD did as well.  Sterling is now down for seven straight days and five consecutive weeks. It has failed to get much of a lift from last week's BOE rate hike. The GBP had not been below the 1.29 mark for over a year which pretty well tells you that the Brexit negotiations are not going well.  Mr. Market is starting to realize that the dire prospect of a hard Brexit, that could leave UK cut off from the European common market, is knocking on the door. In fact, the UK's International Trade Minister, Liam Fox, suggested that a ‘no deal’ Brexit was more likely than not.  He put the chance of Britain crashing out without a deal at 60%.

Another day, another tariff - the US announced that the 25% tariff on $16 bln of Chinese goods, as the second part of the $50 bln targeted goods in retaliation for the intellectual property rights violations, as of August 23. This isn’t new news but we mention it to highlight the fact that the Australian dollar has become the unlikely trade war casualty. The AUD made a new low for the year as fears intensify that China has started dialing back purchases of Australia’s major export, iron-ore.

Last week wasn’t just about Turkey; there were two other developments that caught our eye. The CAD took a hit last week after over a diplomatic dispute between Canada and Saudi Arabia. The diplomatic dispute began after Foreign Affairs Minister Chrystia Freeland tweeted concerns about the news that several social activists had been arrested in Saudi Arabia, including Samar Badawi, a women’s rights activist who is the sister of imprisoned dissident blogger Raif Badawi, whose wife is a Canadian citizen and lives in Quebec. The Saudi government criticized Canada’s “negative and surprising attitude” and called the country’s position “an overt and blatant interference in the internal affairs of the Kingdom. Saudi Arabia’s foreign ministry expelled Canada’s ambassador and suspended all business and trade between the two countries. The bilateral trade relationship between the two countries while small at less than $4 billion a year, and may be too small to damage the CAD; the dispute was enough to knock the CAD out of its 8 week winning streak.

The other interesting development in the forex market last week was a Reuters article that revealed that the Bank of Japan actually discussed plans to raise interest rates twice this year. Apparently, the market turbulence in early January pulled the rug from under an announcement of a rate hike. The bank then hoped to signal higher rates in July and raise them in September, but weak inflation data scuttled that idea too. The BOJ has been in a “stealth tapering” mode ever since monetary policy was tweaked in September 2016 to yield curve control mode. Since that adjustment the BOJ has not need to buy its monthly goal of 80 trillion yen of Japanese government bonds. It would appear that central banks are getting closer to "synchronised" withdrawal of stimulus measures.

Lastly, it is important to remember that the surge in the USD at the end of the week, which was spurred by the dramatic drop in the Turkish lira, is not just a risk off move. The bullish move is also anchored in the fact that the Fed is still in rate hiking mode. Friday’s release of US July core CPI, which excludes food and fuel, rose 2.4%from a year earlier, the biggest advance since September 2008, strengthens the case for the Fed to keep raising interest rates.