There wasn’t a lot of movement in the major currencies last week: only three quarters of one percent separate the best from the worst. The price action may have marked an inflection point (more on that later) but first, let’s look at the two outliers.

The AUD outpaced all others last week after the Reserve Bank of Australia left rates on hold, as expected. They also restarted their bond-buying program after a 3-month hiatus. As part of its review, the RBA also discussed a range of other possible monetary measures, including foreign exchange intervention and negative interest rates, but both were rejected.

Meanwhile in New Zealand, the NZD was unable to capitalise on a better-than-expected jobs report as Mr. Market is increasingly wary ahead of next week’s August policy decision by the Reserve Bank of New Zealand. The RBNZ has previously floated the idea of employing unconventional easing measures, such as negative interest rates and foreign asset purchases, that would see the bank dumping the NZD on the market in exchange for assets denominated in other currencies - both would be bad news for the Kiwi.

Since the spike in the USD in March, due the liquidity crunch brought on by Covid-19, the USD has fallen out of favour. The monetary response by the Federal Reserve has caused the USD to lose its interest rate differential advantage. The fact that other countries got hit with the virus sooner and recovered quicker has caused the US to lose it economic growth advantage. Additionally, the initial political response to the virus (or lack thereof), followed by the lack of a cohesive lockdown and restart plan, has caused the rest of the world to question the political stability of the country. All of these issues have weighed on the currency. With that said, we may have reached an inflection point in the path of the USD. 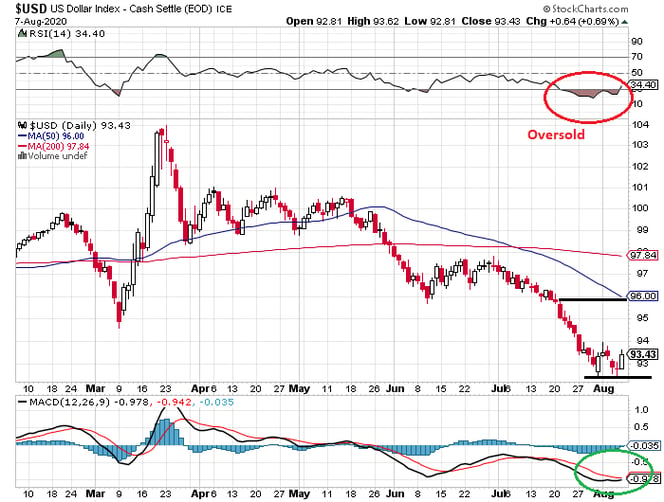 Since our July 20th dispatch (“Japanification”), I have been warning that the fall in the US dollar index was overextended and was due for a correction, so much so that I was beginning to sound like a broken record. As you can see from the chart, the RSI was solidly oversold (red circle above) and has finally moved above 30.

Meanwhile, the MACD appears primed to turn higher. A double bottom may have formed at the 92.50 level and for the correction to take hold, the index must move above 94. If a correction ensues, it will simply be a counter trend short term move, lasting 4 to 8 weeks, within the bearish USD outlook. The corrective move could see the index move up to 96.

The price action in other currencies and gold provides corresponding proof that a two-month correction can take hold. The current reflation positioning in currencies and commodities, as a % of open interest, is at levels historically associated with short term USD bottom. 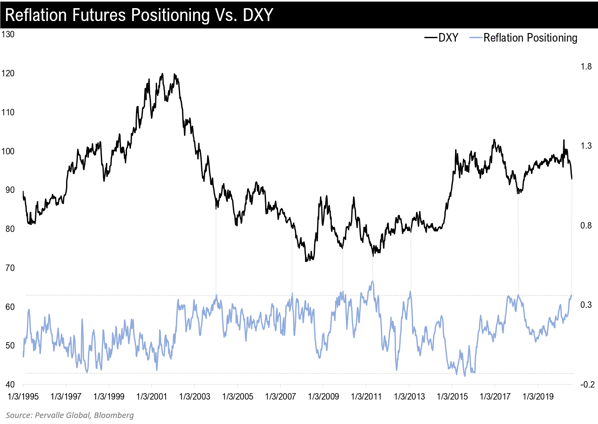 The euro has a 57.6% weighting in the US dollar index and, other than the Swiss franc, it is the strongest currency year to date with a 5% increase against the USD. I want to show you the monthly chart of the euro (below) for two reasons. Firstly, it is on the cusp of breaking a trend line that has been in place since 2008. Secondly, you can see that when trends change in the currency markets, they tend to last for a long time (8 to 10 years). As you can see, the euro was up from mid-2000 to mid-2008 and down from mid-2008 to mid-2020.

Looking at the daily chart, the euro may have put a double top at the 1.1910 level. The momentum indicators are turning down. A correction could see the euro fall to 1.16, where a shelf has been carved out on the hourly chart. If that doesn’t hold, there is resistance at 1.15 on the daily chart. 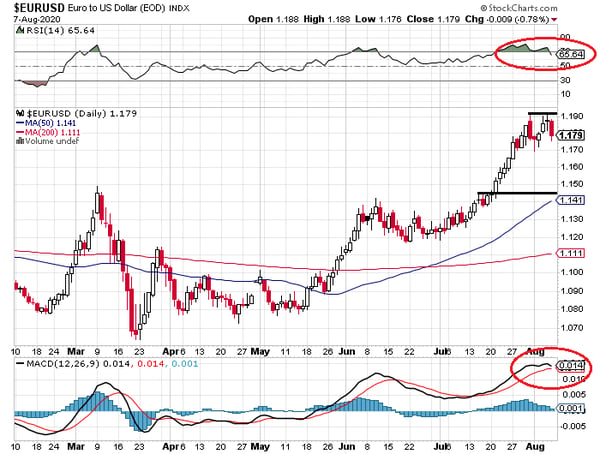 The USD may have also bottomed against the CAD. It looks like it made a double bottom around the 1.3230 level and the momentum indicators have turned up. It could move to the 200 day-moving average, and if it crossed it then it could reach as high as 1.36 in the correction. 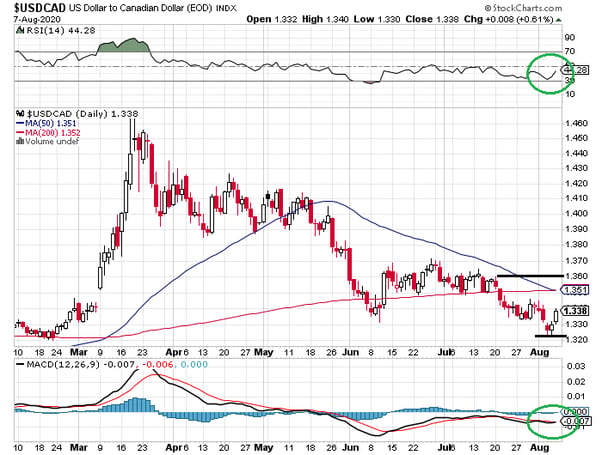 The price action for several currencies such as the GBP, yen, and AUD display similar- looking daily charts which reinforces the inflection point. The chart of gold is also confirming the correction narrative.

The fact that gold soared past 2K speaks volumes about the post-Covid economic recovery. Gold is screaming at the top of its lungs – “where’s the V-shaped recovery?!” High gold prices and record low bond yields speaks to the dim view of the US recovery. An interesting development in the futures markets is that a large amount of gold contracts were closed by taking delivery of gold bars instead of cash. This is highly unusual in the futures market. Last month’s settlement was a record 102 tons. This is not retail, but rather institutional demand.

Gold has passed its previous all-time high against the USD reaching as high as $2074.92. It rose for 15 straight trading days before selling off on Friday, closing below the previous day’s low, which may have marked a key reversal. The momentum indicators have not confirmed a temporary top yet, but they are in a process of turning lower. 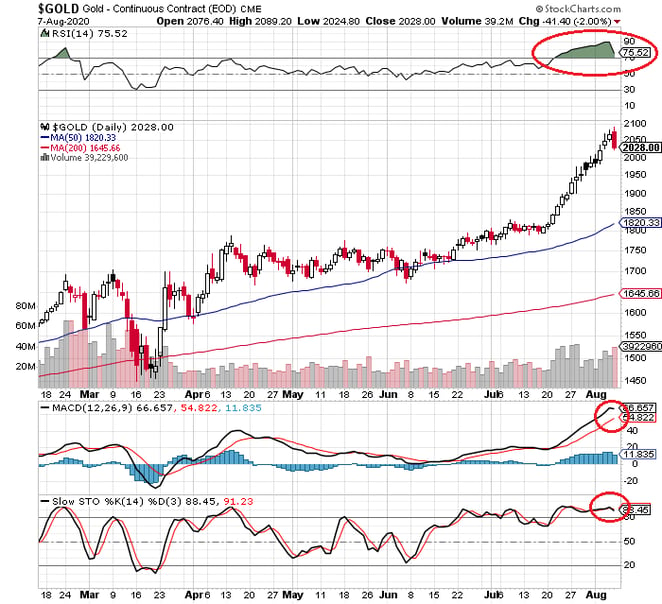 In the week ahead, only politics may undo this USD correction narrative. US politicians continue to play chicken with another coronavirus stimulus package, putting the economic recovery in jeopardy. Congress was due to start its summer recess on Monday, but it looks like they will delay their holidays until some sort of package is agreed to. Over the weekend, President Trump issued several executive orders relating to this issue, but time will tell if those are sufficient to move the needle.

Also this week: on August 15, US and Chinese officials are due to review the progress of the Phase 1 trade deal. Interestingly, August 15 marks the 49th anniversary of the end of the Bretton Woods system of fixed exchange rates established at the end of World War II. We’ll be watching closely to see what news and market response may come from these meetings.