A Cold Dose of Reality

The past week saw a long overdue correction in the USD.  Although JPY took the crown as the winner on the week – due largely to recent ‘non-ultra-dovish’ remarks by Bank of Japan chief Kuroda at Davos – still the greenback turned in a stellar performance.  Let’s take a closer look, shall we?

The media devoted much ink and airtime to the massive correction in US and global equity markets, all of which had been setting record high after record high for quite some time now.  As has been usual through the entire postwar period, America is once again the engine leading the train of economies along behind it.  Either because of Donald Trump or despite him – likely the former – American economic confidence is soaring.  After a lengthy hibernation during the Obama years, recent business and personal tax reform along with regulatory changes (Read: less) and a generally more positive business environment has provoked Keynes’ so-called ‘animal spirits’ into action.  Global central banks appear to be coordinating a return to a more normal interest rate environment, with the Federal Reserve leading the way.  That means rising bond yields and rising interest rates generally, as our friend the bond salesman has explained in the past.  Additionally, although it can be too early to be certain, Congress appears to have to come an agreement to continue funding the US government (thus avoiding a shutdown) for a two year period.  As this issue is both tiresome and confusing, and is plagued with posturing on both sides, the whole thing might come unraveled at any time. 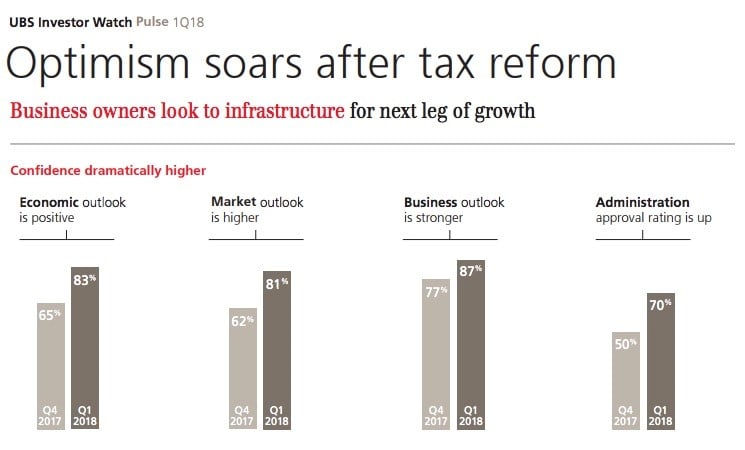 Equity prices came under pressure from several sources – profit-taking by investors, rising bond yields competing with common share returns, deployment of capital away from equities to fixed plant investment etc.  Additionally, market players realize that as central banks move away from quantitative easing (QE) in their respective economies – not all at once, or even at the same time, but they are all moving in that direction – much of the support for equity prices and bond prices is ebbing away.  Hence the sell-off in equities and bonds.  Rising bond yields help the USD and that led to a decline in commodity prices as well.  All in all, it was a long-overdue correction in what had become a rather frothy market.

As mentioned, bond yields continued their inexorable rise, with the 30-year treasury crashing above 3.00% and the benchmark 10-year now trading around 2.81%, well above the key 2.63% level.  The latter had proven formidable resistance for some time but it now appears bond yields are headed north for real.  Administered interest rates will rise in lockstep. 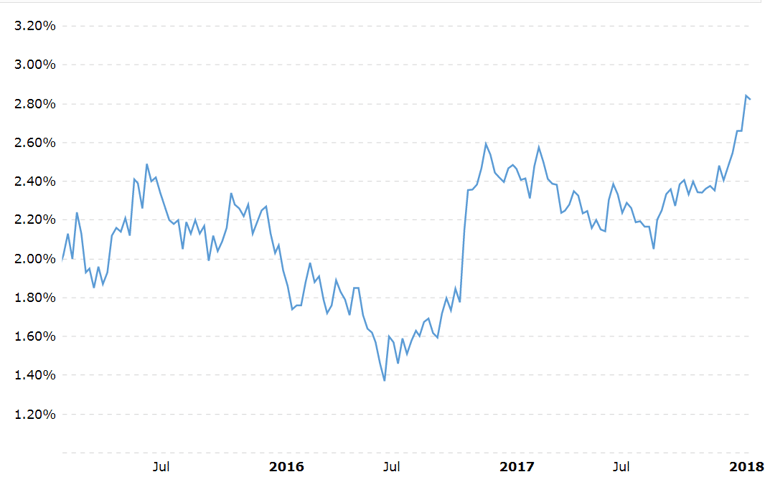 US Treasury 10 Year - This May Get Ugly

Speaking of rising rates, while the Bank of England left rates unchanged at their meeting last week, Governor Mark Carney, in classic central bankerspeak, made the following observation:

‘Committee judges that, were the economy to evolve broadly in line with the February Inflation Report projections, monetary policy would need to be tightened somewhat earlier and by a somewhat greater extent over the forecast period than anticipated at the time of the November Report, in order to return inflation sustainably to the target.’

In other words, the BOE strongly anticipates raising rates sooner rather than later. Mr. Market keyed on that and rallied GBP until it ran headlong into the greenback express. 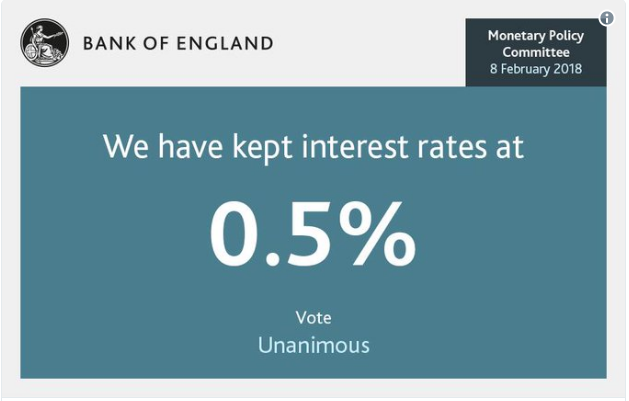 In the True North, last Friday’s jobless numbers took the market by surprise.  The jobless rate rose to 5.9% vs the expected 5.8%, but total jobs created caused wild swings in immediate post-release trading.  The economy showed a net loss of -88.0K jobs which players took as bearish for CAD, so the currency promptly took a nosedive against USD, then just as quickly recovered when traders viewed the jobs breakdown: Part-time -137K / Full-time +49K.  The increase in full-time work was excellent news and will likely not dissuade the Bank of Canada from continuing to raise the overnight rate.  The oversized decrease in part-time work may be connected to the large increase, in the bellwether province of Ontario, of the province’s minimum wage to $14/hour.  Time will tell.

The coming week sees a plethora of economic releases in America, with just a scant number of Canadian releases.