In recent months it has become increasingly clear – if it wasn’t already – that central banks are calling the shots in global capital markets. It hasn’t always been this way, of course. Prior to the Panic of 2008 (and perhaps even going back to the Crash of 1987) the role of central banks was essentially reactive: raising administered rates when the economy ran hot and inflation rose, lowering rates to stimulate a recession-bound economy, and always acting as a lender of last resort to ensure liquidity and orderly flow in capital markets. In other words, a very low profile. The essential role of markets – price discovery – was left in the hands of market professionals, otherwise known as traders, players, investors, and so on. Through the messy and oft-times grubby process of bidding and offering, a group of traders – some buyers, some sellers – could negotiate back and forth until a mutually acceptable price was worked out. In other works, the value of a stock, bond, currency, barrel of oil, bushel of corn, or whatever else at a given point in time could be determined. This is not a new process: such haggling was occurring in market bazaars in early historic times and has continued until recent times because it works. Nowadays it is obviously much more sophisticated but, at heart, still represents a negotiation between buyer and seller; the very definition of a free market.

In recent years, central banks have changed all that. In 1987, Federal Reserve chair Alan Greenspan flooded the capital markets with cash following the large decline in equity prices in October 1987. At the time, this was considered a novel approach to restoring market confidence and became the Fed’s preferred method in dealing with future dislocations. Other central banks were quick to follow suit.

Fast forward to today and central banks have largely arrogated to themselves the role of price discovery once entrusted to open markets. Administered rates near the short end of the yield curve are essentially zero in North America and negative in Japan and Europe, while quantitative easing – initiated by Fed chair Ben Bernanke in response to the banking failure in 2008 and swiftly copied by other central banks – amounts to yield management or even suppression of long-term bond yields. In fact, it can even be argued that the aggressive purchase of government debt by central banks in this current era of mammoth government deficits amounts to monetisation of that debt. Such reckless money-printing has generally not worked out well in the past.

In his rate-setting announcement last Wednesday, Fed chair Jay Powell made it abundantly clear that rates are low and will stay low for the foreseeable future. None of this really comes as a surprise. Our learned colleagues Dr. Long and Mr. Short parsed out the salient points of Mr. Powell’s remarks:

The key paragraph in the statement was this:

“The path of the economy will depend significantly on the course of the virus. The ongoing public health crisis will weigh heavily on economic activity, employment, and inflation in the near term, and poses considerable risks to the economic outlook over the medium term.”

The path forward seems clear. The Fed has capitulated, raising the white flag, and will continue printing dollars for an indefinite period. Bond yields will remain low, and Mr. Market will continue trashing the greenback, as was evident in the chart above.

Several weeks back (The Numbers Don’t Lie…- July 6, 2020) we remarked on what appeared to be a ‘plateau-ing’ of jobless claims. Claims have now risen for the second week in a row, indicating a possible stalling-out of the nascent economic recovery.

In this last piece of American economic news, Q2 GDP was released last Thursday and, to no one’s surprise, fell sharply. Although an annualised rate of -32.9% stole the headlines (call -34.5%), this was not the worst quarterly GDP read ever. Q1 1946 takes the cake, under the great President Harry Truman, who was beset not only by national railroad and coal mine strikes, but the problems engendered by a wartime economy and populace transitioning to peacetime. 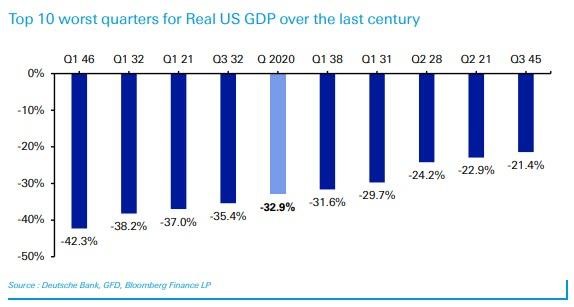 In the True North, the only number of note was May GDP, rising a better than expected +4.5% (call +3.5% qtr/qtr) and outdoing the April result of -11.6%. In a nod to market players who might dismiss this May number as old news, Statscan released a “flash” estimate for June at +5.0%.

The loonie moved only slightly on the positive news, as softer oil prices and a massive write-down of oilsands assets (-9.0 billion) by French petroleum giant Total worked against the CAD.

While on the topic of GDP growth (or the lack thereof), the Eurozone posted an overall contraction of -12.1% (qtr/qtr) in Q2/2020. The German economy, unsurprisingly, outperformed its peers in the zone. 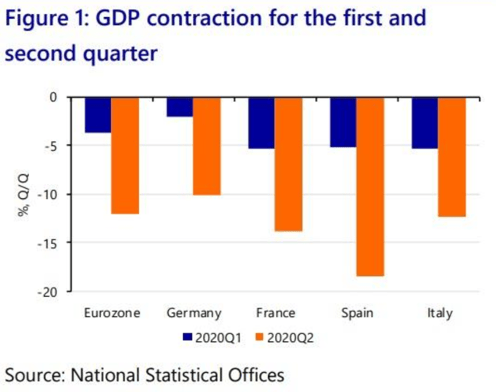 European consumers appear to be spending, with Retail Sales rebounding in zone leaders France and Germany. In the latter, spending dropped far less than elsewhere in the zone. This is critical to moving the zone economy forward and putting this Covid-19 lockdown in the past. 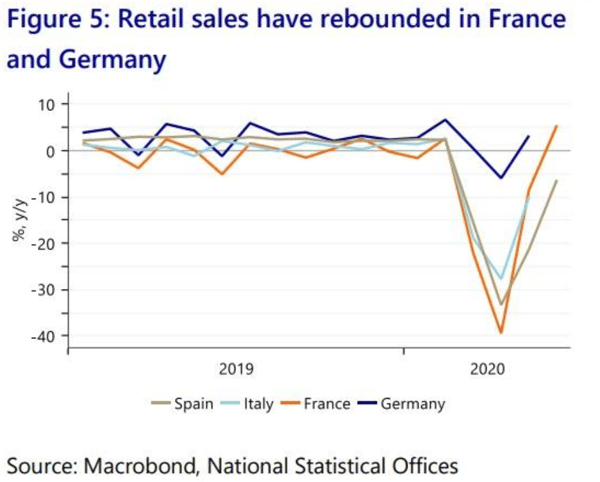 The coming week sees the all-important employment numbers for both Canada and America, some secondary economic statistics, and a dash of Fedspeak.