Last week witnessed a veritable housecleaning of sorts, with some major nagging issues resolved (or at least moving forward). Let’s take a look, shall we?

The big news was obviously the win by Boris Johnson and his Conservative Party in the UK election held last Thursday - the best showing by the Conservatives since 1987. So convincing was Mr. Johnson’s triumph that Labour leader Jeremy Corbyn felt compelled to resign, after Labour suffered its worst defeat since 1935. In fact, even Laura Pidcock, touted as a potential eventual successor to Mr. Corbyn, failed to win back her seat.

Analysing the political ramifications of this historic win by Mr. Johnson is beyond the scope of this blog, but we will note two things:

GBP sold off on the good news, on profit-taking by traders who had bet aggressively (by buying GBP) on a Conservative victory.

That was Wednesday. Last Friday saw the release of what can fairly be described as disastrous Canadian November jobless numbers. They were not pretty.

The next item dealt with was the ratification of the USMCA free trade agreement announced over a year ago. The document lacked the signature of President Donald Trump, which (after late negotiations with Democrats) was finally obtained. Of the other two signatories, only Mexico had signed off on the package, while Canada had delayed ratification until after the recent election. Given that the victorious Liberal Party had agreed to the original deal, ratification should be on track and this deal should soon be done as well.   Neither CAD nor MXN moved much on the news, the deal having already been discounted by traders, but it is now nearly in place and businesses in all three countries have some much-needed clarity.

In the EuroZone, signs of life were spotted in the German economy. The December ZEW Economic Sentiment Index, widely watched by market players, rose strongly in the most recent report. Analysts had forecast a rise to +0.3 from the prior -1.0; the final number was reported at +11.2, an astonishing rise, and one certain to reassure the European Central Bank.  Speaking of the ECB, recently installed ECB chief Christine Lagarde held her first meeting, and kept rates steady at current levels. Additionally, the Bank reiterated its intention to keep rates at, or below, current levels until inflation approaches, but does not reach, the 2% level.

Ironic that, while one central banker was talking up a rise in inflation, the man most closely associated with vanquishing the inflation beast of the 1970s and early ‘80s passed away. Times have certainly changed! Paul Volcker was chairman of the Federal Reserve from 1979 to 1987, and in this author’s opinion was one of the greatest to ever hold the job. 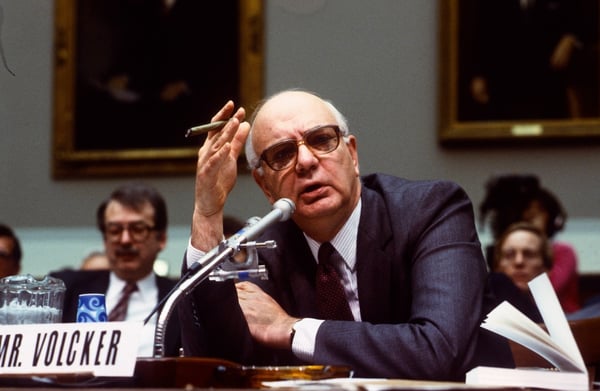 In the Land of the Free, numerous secondary economic statistics were released over the course of last week. The most interesting was the NFIB Small Business Optimism index, which rose sharply to 104.7 from the previous 102.4 and topped the market call of 103.0. Small businesses hire a disproportionate number of workers, and if they are confident about the future and willing to hire and expand, then this is a major positive for the US economy going forward. Perhaps this helps explain the recent strong employment numbers? November CPI and PPI numbers were released and largely in line with expectations, while November Retail Sales disappointed at +0.2% vs the call of +0.4%. Ex-autos were softer at +0.1% vs the call of +0.3%.

Like their colleagues at the ECB, the Federal Reserve held overnight rates steady at 1.50-1.75% at their meeting last Wednesday. The vote by the FOMC was actually unanimous, 10-0, the first time since last May. In fact, the Fed appears ready to stand pat for now, calling the current level of rates appropriate in supporting jobs, growth, and inflation and dropping any reference to “uncertainties”. The rest of the statement was unchanged from prior meetings: strong labour market and household spending, weak capex and exports, continuing to monitor developments, et cetera. 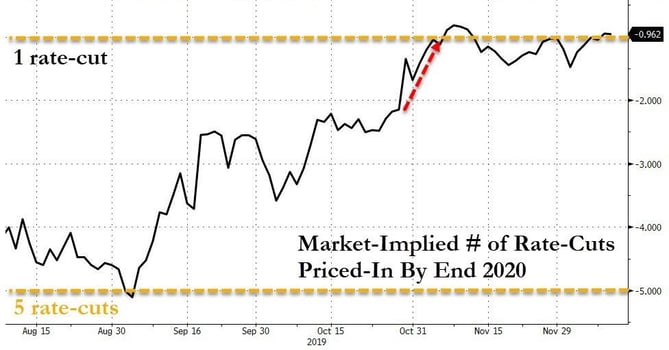 It appears the Fed is saying all clear to investors. Steady growth, plenty of jobs, inflation under control – the very definition of a ‘soft landing’, and just in time for the 2020 election cycle!

Time to take a look at trade:

The last outstanding item to be dealt with – to a degree – was the ongoing Sino-US trade talks. As the above timeline shows, the Trump administration has not been shy about going after those countries considered unfair traders, the chief culprit in their view being China. At the time of writing, a so-called Phase One deal has been struck between the two economic superpowers, and the Tweeter-in-Chief described it thusly:

These two tweets largely sum up the salient points of the Phase One agreement. There are further arduous negotiations ahead, starting with the Phase Two deal, so while we would like to say “done” on this unresolved and complex issue, “kinda done” will have to do for now.

The upshot to all this good news is that global central banks no longer have compelling reasons to ease rates. The USMCA is almost in effect, BREXIT is a reality, the Sino-US trade deal is advancing – these developments are enormously positive for the global economy.

On that positive note, this concludes our final market blog of 2019!

We would like to thank our clients, colleagues, and readers, and wish you all a safe, happy holiday and a joyful New Year! We will resume the Weekly Dispatch in January 2020.