Last week witnessed a massive sell-off in equities which were well-covered in the financial press (so we’ll not re-hash it here), while government bonds rallied to absurdly low yields and global oil markets dealt with the emergent price war between Saudi Arabia and the Russians. In this panicky risk-off environment, the greenback was the clear winner on the week. There was little in the way of economic statistics released and, frankly, at the present time they are of scant relevance.

In brief, governments and central banks around the globe are ramping up spending by providing a mix of fiscal and monetary stimulus. 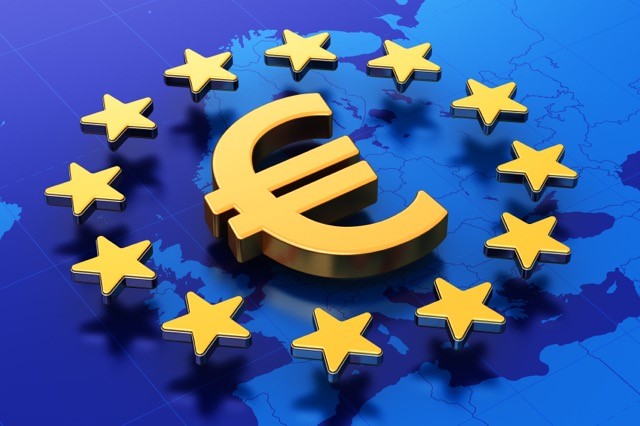 In the Eurozone, the European Commission has allowed member states to ignore the zone’s usually very strict rules governing deficit spending. Zone paymaster Germany has pledged to do “whatever is needed” to ameliorate the negative economic impact of the coronavirus epidemic. Specifically, Germany will ensure its corporations have sufficient cash on hand to ride out the storm, and that there will be “no limit” to the cash available. Italy had previously been granted an exemption as the virus had hit the country particularly hard. France announced that support will be made available to companies and workers hit by the current crisis.

Earlier in the week the European Central Bank had left its administered rates unchanged but, on the other hand, announced 120.0 bil EUR in further quantitative easing and adjustments to its longer-term refinancing operations (LTROs). In practical terms: more money for market players to borrow. This monetary stimulus, along with the fiscal fillip coming soon from government spending, pleased market players who rallied equity markets on the news.

In the UK, Bank of England governor Mark Carney – in his last announcement as head of the BOE – cut the overnight rate by a full half-point, taking the rate to 0.25%.  The decision by the Monetary Policy Committee was unanimous. 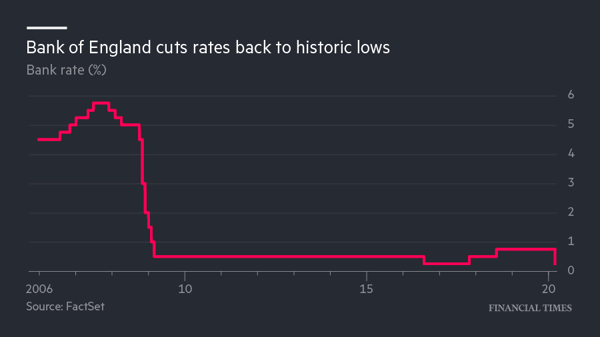 An additional 200.0 bil GBP in corporate credit was made available through the banking system to ensure companies can weather the coronavirus storm.  The recently-elected government of Boris Johnson will also be bringing down its first budget this coming Wednesday, and it will likely contain further stimulating fiscal measures.

In the US, following record-setting losses on all the major equity indices, the Federal Reserve fired what has been termed a “bazooka” at the markets. A total of 1.5 trillion in new lending facilities (repurchases or “repos”) has been set up to provide more market liquidity. The Fed is also renewing, this time officially, another round of quantitative easing - bond purchases which will provide further liquidity to the banking system. Mr. Market initially sold off on the lack of matching fiscal stimulus from the Trump administration to complement this huge monetary spur from the Fed, as partisan wrangling on Capital Hill prevented a quick stimulus bill from being passed. Regardless, further positive developments overseas helped rally equity markets late in the week.

Analysts have pointed out that, in addition to burgeoning liquidity provided by central bank rate cuts, the sharp recent decline in oil prices and the big drop in bond yields have provided a solid push to consumers, who can now pay less for gasoline and re-finance their home mortgages at much more attractive rates.  This is not a trivial thing.

The Federal Reserve will be making its regularly scheduled rate announcement this Wednesday. According to the guys in Chicago, the Fed may cut rates 100 basis points (bps) all the way to zero. 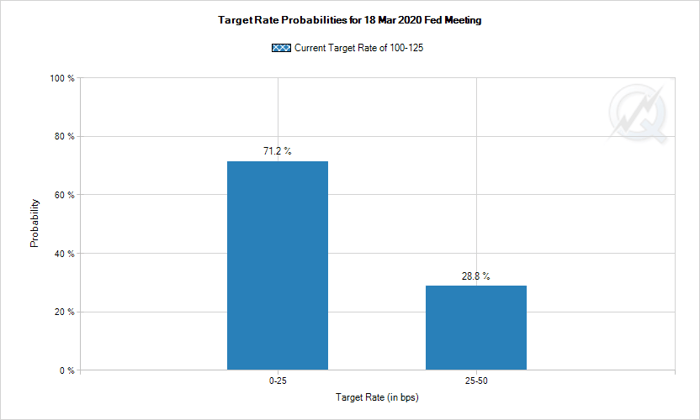 In the True North, the Bank of Canada directed 7.0 bil CAD to the country’s banking system while expanding its bond buy-back program. Last Friday the BOC followed through on Governor Stephen Poloz’s remarks on March 4th about further rate cuts with a 50 basis point drop in the Bank’s overnight rate, bringing it to 0.75%. On the fiscal side, finance minister Bill Morneau is slated to release his budget on March 30th. Some analysts are calling for an immediate stimulus package of around $15 to $20 bil (roughly 1% of 2019 GDP of 1.75 tn CAD, to ward off a serious recession in Canada.

Lastly, after all this recent to-do, who have been this year’s biggest winners? Biggest losers? The graph below tells all and, not surprisingly, the VIX (aka ‘Fear Index’) was the clear winner, while crude oil brought up the rear. 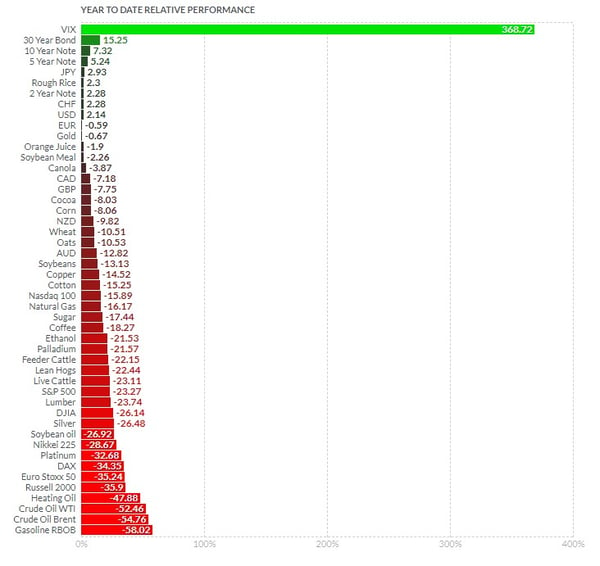 The coming week sees a Fed rate announcement on Wednesday, which will be closely watched by market players. There is also a good roster of economic statistics which, in the current environment, have been rendered largely academic.

Note to our valued readers: the newsletter will be on hiatus next week, but will return March 30th