The carnage in the equity markets continues. Up until the beginning of October, the S&P 500 was up about 9% for the year - since then, it has managed to lose all its gains and as of Friday is down 1.78% for the year. The uncertainty in the US/China trade war, the fall in crude oil prices, concern about peak earnings, and the anxiety over the future pace of the Federal Reserve’s interest rate hiking campaign seem to be the catalysts for the meltdown in equities. The resulting risk aversion has driven all of the major currencies lower against the Swiss franc and the USD.  On the flip side, today’s risk-off setting is a heavy burden on the currencies of Australia and New Zealand which rely heavily on exports to China. Having said this, all eyes will be on the scheduled meeting of President Donald Trump and his counterpart Chinese President Xi Jinping on the sidelines at this week’s G20 meeting in Argentina. Everyone is anxious to see the outcome of the meeting – will it be a ceasefire or an escalation in the trade war.

The losses in equities pale in comparison to the loss in crude oil. Up until the beginning of October, West Texas Intermediate (WTI) was up about 28% for the year - since then, it has managed to lose all its gains and as of Friday is down 16.6% for the year. WTI was down 11.1% in this week alone and has gone down for 7 consecutive weeks. The ongoing weakness is mainly driven by growing fears that the supply overhang could soon return to the market. Saudi Arabia’s oil minister said Thursday that production from the world’s largest exporter had climbed further this month and, with President Trump standing with the Crown Prince MBS in the Khashoggi murder, it’s unlikely that the Saudis will be cutting production any time soon. Meanwhile, the latest US Energy Information Administration data showed that the US commercial crude oil inventories climbed by 4.9 million barrels to 446.91 million barrels last week, its highest level since December. The market was also caught off guard from the unexpected exemptions from US oil sanctions granted to Iran's eight largest oil customers. It is also worth mentioning that the fall in oil prices may prove to be more important than the turmoil in equities when it comes to monetary policy and central banking. 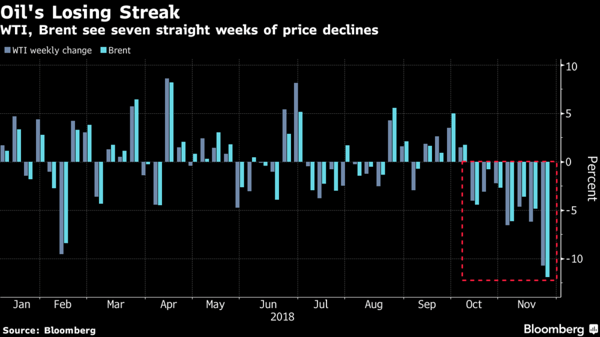 As long as oil prices continue to fall,, the path of least resistance for the CAD is lower. Technically, the USD/CAD rate has broken above the 4-month bearish channel while forming a new bullish trend line (green line).  The rate has consistently put in higher highs and higher lows since bottoming in early October and has moved in unison with its 20-day moving average, at times moving below on an intraday basis but never closing below it. Barring a move below its rising uptrend line, its next target is the 17-month high near 1.3385.

The Bank of Canada meets again on December 5th and no change in rates is expected but the market is expecting the BOC to hike interest rates by a quarter point to 2% at their January meeting. Having said this, recent data has been mixed with strong jobs data but slow wage growth and with an inflation rate that is in the middle of the BOC’s 1-3% range. If the trade war intensifies, this could play into the BOC’s hiking plans.

Speaking about interest rate hikes, the future path of the Fed’s hiking trajectory continues to plague the markets. Ever since Fed Chair Jerome Powell made the comment that interest rates were a “long way from neutral” in early October, both equities and oil have been rattled. At a speech in Dallas on November 14th, Chair Powell said that “Fed policy is part of the reason the economy is in such a good place right now.” These two statements seem to confirm that Fed policy will continue on it present course.

Since then, four FOMC colleagues have made dovish statements that may be hinting at a change in policy stance:

Is this the Fed’s attempt to remind us that they are not on auto-pilot – time will tell.

The Fed’s dots pointed to a median expectation of three moves in 2019.The market is pricing in only two hikes.The market-implied odds of a Fed rate hike in December, long thought to be a “done deal,” ticked down to just 74.1% from 83% a month ago, according to the CME’s FedWatch tool.

Where does this leave the USD? The USD has risen despite the ratcheting down of the Fed’s tightening trajectory. Lately, the USD has been going up because of negative developments elsewhere such as the ongoiing Brexit saga, Italy’s fight with the Eurozone over their budget, contractions in Q3 GDP for both Japan (world's third largest economy) and Germany (the world's fourth-largest economy). For now, the US dollar index remains in its two-month bullish channel.  Major market professionals, as well as President Trump, are calling for the Fed to ease up on the throttle, thus this Wednesday’s speech by Chair Powell will be a closely-watched event.