Market participants were certainly taken on a wild ride last week. The tiresome coronavirus has reached all the way into the White House with President Donald Trump’s hospitalization last week. Players quickly re-calibrated their bets on a stimulus package (unlikely) and a Biden win/Trump defeat (according to polling, increasingly likely). Mr. Trump made an astonishingly speedy recovery from the virus, unlike British PM Boris Johnson who had ended up in ICU for a spell, and returned to the Oval Office in mid-week triumphant and apparently fit and raring to go, much to the delight of his base. 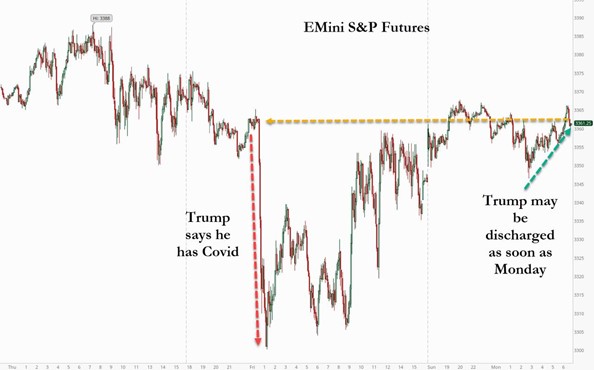 Equities gained back the ground lost and then some until a series tweets put out by the Tweeter-in-Chief cast doubt on a long-awaited stimulus package. Market players had been hoping for quite some time now for a spending deal to be put in place sooner rather than later, but Mr. Trump (apparently) dashed those hopes. 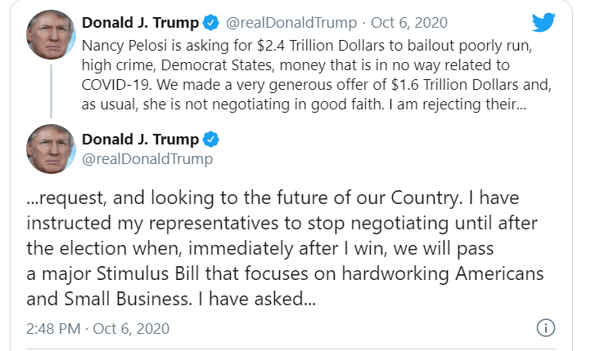 Of course, markets pulled a U-turn on this development. Equities tumbled as traders once again re-calibrated their bets, helping October to live up to its reputation as a volatile month for trading. The greenback moved higher as Mr. Market embraced risk off, but one should bear in mind that this is Donald Trump: things are never quite what they appear.

In his writings over the years on negotiating tactics, he has always made clear that one has to be prepared to walk away if a deal is unacceptable, and this was our initial impression of his actions. Regardless, the aftermath of these tweets on Tuesday afternoon was a mess, with Democrats and the business media condemning the president in unison.

Wednesday morning was a different story, as the President, apparently taken aback by the negative reaction he engendered, sought to renew discussions on a stimulus deal. As you can see below, markets liked what they heard. 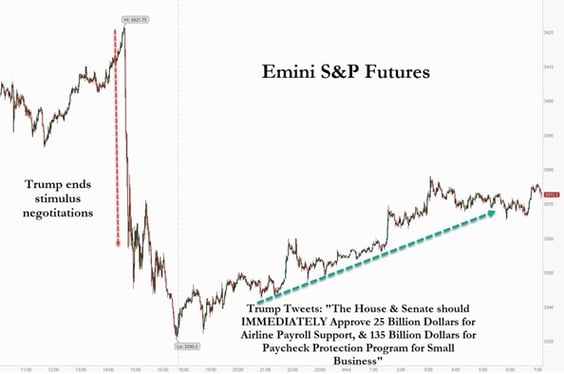 Investors can be forgiven for feeling whipsawed by all these rapid developments, initiated by a 74-year old who had just recovered from a COVID-19 infection. At any rate, the greenback barely beat out the hapless JPY to end up the loser on the week, as investors buoyed by stimulus package hopes sold the USD.

In terms of economic measures, the week was rather light. However, there was a lot of Fedspeak; Fed honcho Jay Powell spoke on Tuesday, largely sticking to the script adopted by Fed speakers in recent months. Our learned colleagues Dr. Long and Mr. Short noted the salient points of Mr. Powell’s speech:

Of course, this was prior to Mr. Trump’s tweet ending talks on a stimulus package.

The minutes of the Fed’s most recent rate-setting meeting were also released last week and contained little in the way of surprises or new items.

We will leave off our review of the US with a graph showing the increase in the US national debt. The “debt ceiling” is a quaint reminder of just how seriously the national debt was once viewed. 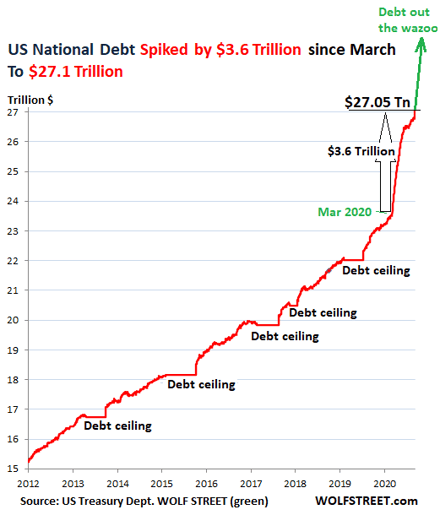 For clarity, we should provide readers a straightforward definition of the trading expressions “risk on” and “risk off”:

It’s time to take a look at Canada, a country largely ignored by investors due to its small population and resource-based economy. Much like Australia, another huge country with low population density and tremendous natural resources.

Last Friday, the Canadian economy beat all expectations in the September Labour Market report when it added +378K jobs, of which 334K were full-time. The balance part-time and the jobless rate tumbled to 9.0% from the prior 10.2%. Analysts had called for just +150K jobs and a rate of 9.7%. The loonie rallied initially on this news, although it had been moving higher in the general risk on environment of the markets. (By week’s end a US stimulus package looked increasingly likely). 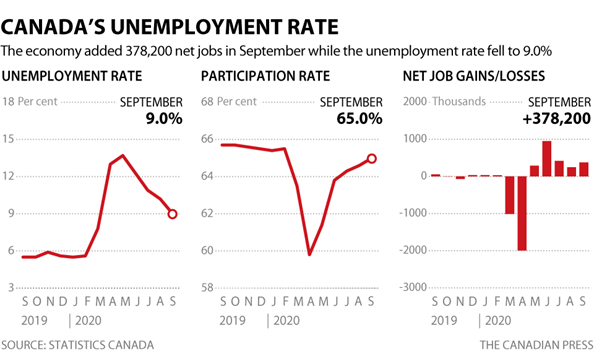 Late Friday it emerged that, of the jobs created in September, over 260K were in the public (read: government) sector, and just 144K in the private sector. In line with most other governments these days, Ottawa has been borrowing a lot and spending just as quickly. Much of it is justified by coronavirus, but a considerable amount of spending – as noted in the recent Throne Speech – is going towards government attempts to, in a sense, re-define Canada.

How this will play out in the future is unknown, but Canada has the dubious distinction of having the most national debt essentially “monetized” by its central bank. In this there are elements of “Modern Monetary Theory”, a topic to which we will return in a future newsletter. 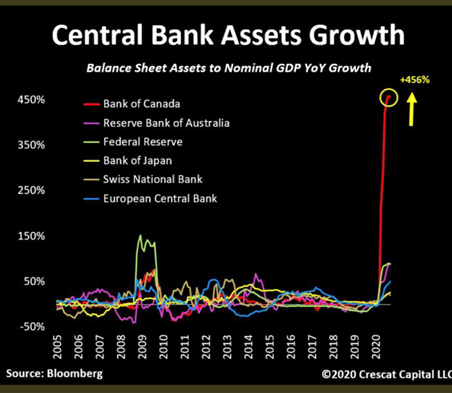 Bank of Canada boss Tiff Macklem spoke last week via videoconference with reporters following a speech to the Global Risk Institute. To use the standard journalistic phrasing, he did not deny the possibility of the Bank eventually adopting a negative-interest rate policy, saying that while it is something not being actively considered, still it remains in the Bank’s “toolkit”. The general consensus among market-watchers is that the Bank will consider the use of negative rates should downside risks to the economy intensify.

Canadian markets were closed yesterday for the annual Thanksgiving break. The coming week sees little in Canadian economic metrics, while the US has inflation numbers, retail sales, and (once again) lots of Fedspeak.