With only 1% separating the best and worst performers, major currencies traded in a narrow range last week as risk sentiment took a punch in the gut. The risk off mode started last Sunday when China hawk, Peter Navarro, replied, “it’s over” to a Fox News reporter asking about the Phase 1 trade deal. President Trump quickly walked the sentiment back with a tweet stating that, “The China Trade Deal is fully intact. Hopefully, they will continue to live up to the terms of the Agreement!".

Unfortunately, the tide turned again on a report that US Trade Representative announced a list of imports, worth $3.1B, that could be subjected to new tariffs against Europe as part of a dispute over government subsidies to European aircraft maker Airbus. Finally, as the week progressed risk sentiment continued to sour due to the alarming rise in US COVID-19 cases. The rise in cases is not the second wave but rather the consequences of not effectively dealing with the initial contagion. Against this backdrop, its not surprising that funds flowed into the safe haven of the swiss franc. 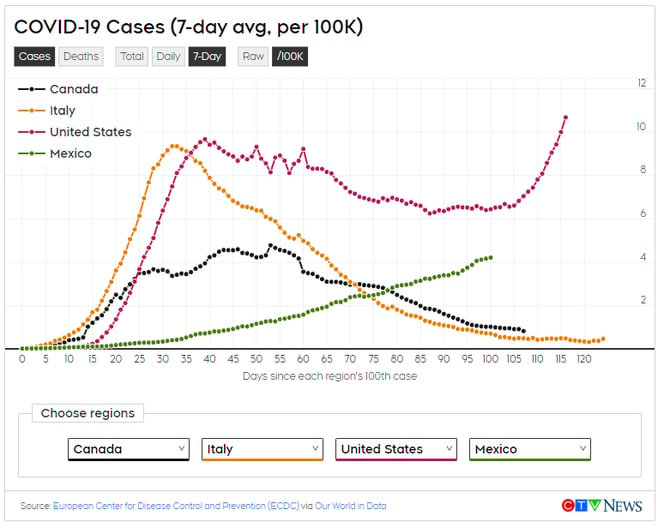 Canada may be crushing the COVID curve, but the currency took a hit last week after rating agency Fitch downgraded Canada's Long-Term Foreign Currency Issuer Default Rating (IDR) to 'AA+' from 'AAA' (outlook stable), citing the deterioration of Canada’s public finances resulting from the pandemic. Canada’s deficit of around 12.5% this year (1% in 2019) will lift its debt to about 115% of GDP. Of course, this is not unique to just Canada, as other countries’ ratings are sure to be cut over the remainder of the year. Interestingly, it leaves Germany as the only AAA-rated sovereign by the three main rating agencies in the G7.

Staying with the CAD, lets have a look at the bearish and bullish forces driving the currency at the moment. The most obvious bearish factors are renewed tariffs by the US on Canadian exports, such as last week’s announcement that the US is considering imposing another round of aluminum tariffs in an apparent response to shrinking domestic demand amid the COVID-19 economic slump. Other factors are renewed global trade wars, which would further depress worldwide trade and lead to more protectionism. Lastly, a renewed oil price war which would lead to additional domestic industry-wide crude production shut-in.

On the flip side, there are two factors that could propel the CAD higher. Firstly, an economic V-shaped recovery to 2019 output would be bullish. Secondly, a comprehensive health solution (treatment & vaccine) to the COVID-19 crisis would allow a quicker economic recovery. These two factors seem more like wishful thinking at this point. However, another factor that could help the CAD is a renewed negative sentiment towards the USD due to its twin deficits and ultra easy monetary policy.

The USD/CAD rate has come down since the March highs to fill in the gap on the daily chart in mid-June. It has been grinding higher after putting in a double bottom at 1.3315. The event to monitor now is the downtrend line off the March and May highs intersecting around 1.3735. A move through that resistance line could spur a move towards the prior shelf that was supported for about 3 months at the 1.3850 level.

There were three other items that caught my eye last week: more central bank easing, the conundrum of stock markets versus the economy, and the unthinkable - no clear winner to the November US presidential election.

Believe it or not, 81 central banks have cut rates this year. Last week was no exception, as the central banks of Mexico and the Philippines both cut by 50 bps. Also, the ECB took on a new initiative that caught the market by surprise. The central bank will set up a new backstop facility, called the Eurosystem repo facility, for European central banks which are part of the EU but not in the Eurozone. It will lend euros against collateral of euro-denominated paper from eurozone governments and supranational institutions. This is an important initiative which was not utilized in the Great Financial Crisis and will help ease the liquidity crisis in eastern and central Europe.

The stock market rally from the March lows has spawned questions about its veracity considering the sever economic slump, especially the human component of massive unemployment. I came across this chart that plots the S&P 500 index against US macro economic fundamentals. It shows that US leading indicators have explained 97% of the variability in equities over this entire business cycle, and currently they are diverging by a record amount. Right now, there is the extreme divergence between Wall Street and Main Street, but in the end, macro fundamentals always matter. In other works, the stock market is not the economy. 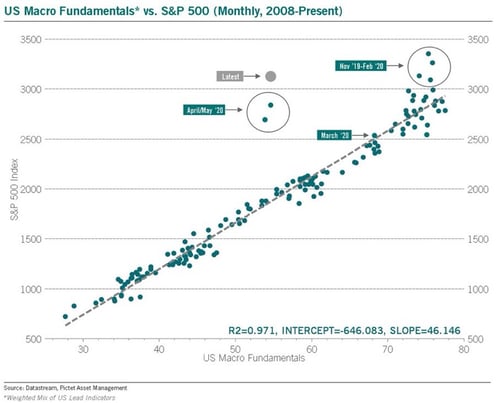 Have you ever wondered how different the world would be if Al Gore won the 2000 presidential election instead of George Bush? That election came down to a recount in Florida. The Florida vote was ultimately settled in Bush's favor by a margin of 537 votes when the U.S. Supreme Court, in Bush v. Gore, stopped a recount that had been initiated upon a ruling by the Florida Supreme Court. If Gore had become President, would there have been a 9/11 terrorist attack, or a US housing bubble, or the 2008 great financial crisis, or a greater and earlier commitment to fighting climate change? We’ll never know.

Still, currency traders are starting to contemplate a repeat of 2000 – the possibility that the US presidential election produces no clear winner, leading to lingering uncertainty due to recounts and court challenges. In fact, the extra political uncertainty has helped lift the premium on dollar-yen options for just after the November elections to an eight year-high versus shorter-term counterparts. The night of the 2016 election, overnight volatility in the dollar-yen pair spiked past 50% the as the votes were being counted. 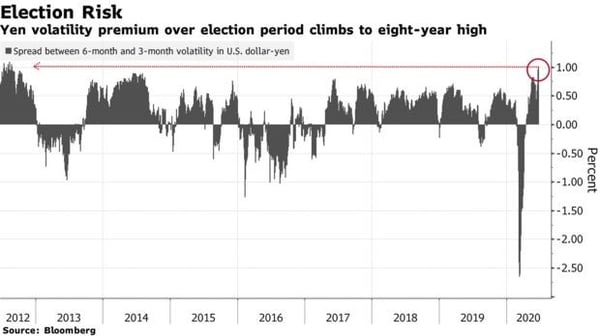 Back in 2000, the recount dispute fueled a month-long legal fight. This time around, the political backdrop is far nastier and polarized, which could lead to a more drawn out affair.  With President Trump lagging in recent polls to Joe Biden, he has already started laying the groundwork for a potential impasse by questioning the validity of voting by mail.

Things to watch for in this shorter holiday week is the China PMIs, Eurozone June CPI, US COVID-19 numbers, and two key political events which will likely have ramifications on the euro. German Chancellor Angela Merkel and French President Emmanuel Macron will meet to coordinate an EU response to the pandemic fallout. Meanwhile, UK Prime Minister Johnson and EC President von der Leyen will restart Brexit divorce negotiations.