To say that the USD was shellacked last week would be an understatement.  As you can see from the relative performance chart, the USD was under tremendous selling pressure last week causing it to break key support levels against most major currencies.  The reasons are two fold, economics and political.  The USD was still reeling from the softer than expected consumer spending and inflation reports released the previous Friday.  Last week began with more unimpressive data as the May Empire State manufacturing survey declined for the first time in 7 months.  The softness of the recent data is casting doubt that the Federal Reserve will raise interest rates next month.

Politics, or should I say the running soap opera in DC, was the main reason that caused the big tumble in the USD.  The main driver was news that former FBI Director James Comey's memos allegedly revealed that President Trump asked him to drop the investigation into former National Security Advisor Michael Flynn.  The concern here is that this information, if true, represents a possible impeachable offense for the President.  For the Trump haters, don’t get your hopes up, we are a long way from that.  The real implication is that the President’s ability to push through his pro-growth policies will be sidelined as the Trump administration scrambles from crisis to crisis. 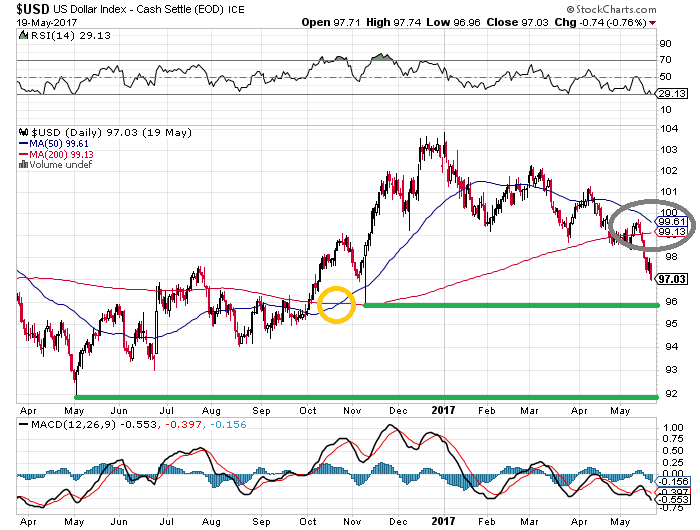 Breaking it down on the chart, the US dollar index has reached its lowest level since President Trump was elected in November.  The index is getting closer to the death cross (grey circle) when the 50-day moving average crosses below the 200-day moving average.  That’s a far cry from mid-October when the index enjoyed a golden cross when the 50 cut above the 200 which had marked a bullish signal.  The momentum indicators are still flashing red indicating that more downside is possible.  The first support would be the 96 level and if that were to give way then a return to last year's low set in early May at the 92 level could be in the cards.

It’s not surprising that the prospects of aggressive tightening from the Federal Reserve have started to fade.  Assuming that the May employment report doesn’t disappoint, the Fed still appears likely to hike rates at its June meeting.  According to the CME's FedWatch tool, Fed Funds futures traders are pricing in about a 78% chance of a rate hike.  However, with politics trumping economic data, the odds of three rate hikes by the end of the year have faded to just 10%.

As we mentioned in the onset, the USD broke some key levels of support against the majors during last week’s price action.  One of those, the euro, made some pretty impressive moves.  Prior to April 24th the euro was trapped in the 1.0550 – 1.0850 range.  That changed that day as the euro gapped up at the opening as confidence grew that Emmanuel Macron would go on to become the President of France after an impressive showing in the first round.  Fast forward three weeks, and the gap that was formed earlier now appears to be a runaway gap as the euro is now over the 1.12 level.

The decline of the euro from the 1.50 level since the end of 2009 was a function of fears about the possibility of a Eurozone break up due to the sovereign debt crisis.  With pro-European Union parties winning in the Netherland and France and with the CDU victory in the recent election in the largest German state of North Rhine-Westphalia offers further evidence that Merkel will most likely be re-elected Chancellor for the fourth time later this year.  Thus, now that the populist-nationalist threat in Europe has been neutralized the threat of a Eurozone break up has fallen off the radar.

It is not just that the politics that are lining up in Europe, it’s the data as well.  Unlike US economic data, European economic data has been steady and consistent and has outpaced its American counterpart.  Even the ultra-dovish ECB President, Mario Draghi, had to recently acknowledge that the Eurozone recovery is resilient and increasingly broad based.  Furthermore, the European Central Bank is getting very close to announcing a tapering of its QE programme which will only add to the bullish sentiment in the Euro.  Therefore, both Mr. Market, investors, and policymakers are growing increasingly confident that Europe has turned the corner.

The chart clearly shows the most likely targets of the euro’s current run.  It is also worth noting that according to the Commitment of Traders reporting week ending May 16, the speculative sentiment has swung sharply in favor of the euro.  Speculators in the futures market are net long euros for the first time in three years.