The GBP was the worst performing currency last week as the prospect of a no-deal Brexit weighs heavy. It is down nearly 7% since the UK deferred the original end-of-March Brexit deadline. Prime Minister Boris Johnson has 90 days left to the latest Brexit deadline of October 31, but the reality is that there is even less time than that. If you take into account the parliamentary summer recess and about three weeks where the House of Commons doesn’t sit so MPs can attend party conferences, they’re left with only 20 days of parliamentary time to force through a vote on the exit agreement and all of the associated legislation required to leave the EU. Furthermore, this uncertainty has forced the Bank of England to shelve its tightening bias which has also weighed on the currency.

At the other end of the spectrum, the Japanese yen was the top gun on the week soaring nearly 2% on safe-haven demand after President Donald Trump broke the second tariff truce in the trade war with China.

Market players have had July 31st circled on their calendars for nearly six weeks as the day the Fed was finally going to cut interest rates, and the Fed delivered. The central bank lowered interest rates by 25 bps to the 2.00-2.25% range and announced that it would cease its balance sheet roll off program (quantitative tightening) immediately, a full two months earlier than previously suggested. This was exactly what President Trump has been wanting for over a year now and the move proved to be very dovish until, of course, Chairman Powell spoke at the press conference. He characterized the Fed’s move as a “mid-cycle adjustment”, pouring cold water on the idea of it being the beginning of a major easing cycle. Powell said that rate cut was aimed at boosting inflation and insuring against downside risks; even with global uncertainty and continued trade war frictions, the Fed feels that the outlook for the economy remains solid. With this turn of events, the USD traded higher against all of the major currencies as the Fed proves to be one of the least dovish central banks.

As you can see from his tweet below, President Trump wasn’t pleased with Powell. Less than 24 hours later, he upped the ante by announcing that he was ending the tariff truce with China.  After meeting with US negotiators returning from trade talks in Shanghai, Trump said he would impose an additional 10% tariff on $300 billion worth of Chinese imports on September 1st. He said that while trade talks resumed and China promised to buy large amounts of agricultural products from the US, they “did not do so”, nor did they “stop the sale of Fentanyl to the United States.” This caused the USD to reverse most of the previous day’s gains. 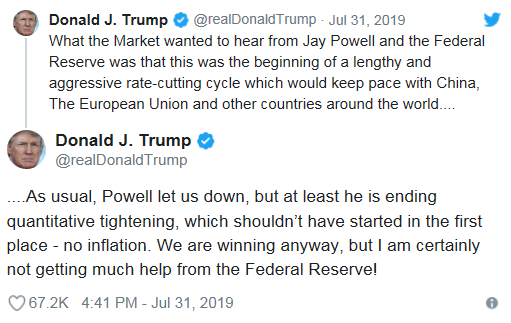 Ending the tariff truce is akin to killing two birds with one stone: Trump is upping the ante on two fronts. On the trade front, it puts more pressure on China’s economy and presumably on their leadership to come to a trade deal. Meanwhile, on the monetary policy front, it increases the likelihood of more easing by the Fed since it highlighted global growth and trade tensions as its main downside risks in its policy announcement. In fact, the implied probability of another Fed rate cut at the next FOMC meeting in September spiked to almost 95% immediately after Trump’s announcement – mission accomplished.

The Bank of Japan also met last week and they held off on expanding stimulus but committed to doing so “without hesitation” if a global slowdown jeopardizes the country’s economic recovery.  Japan is a textbook example of the failure of modern macroeconomic policy and exemplifies why governments and central banks cannot control the economy. The BOJ has pursued decades of unconventional monetary policy and still cannot generate any inflation to speak of. Their task isn’t getting any easier with the US/China trade war weakening Chinese demand for Japanese exports; with Japan removing  South Korea from its list of top trading partners in a dispute that is linked to historical tensions between the two sides; the national sales tax will be increased to 10% from 8% in October; and the easing by the Fed, and soon the ECB. 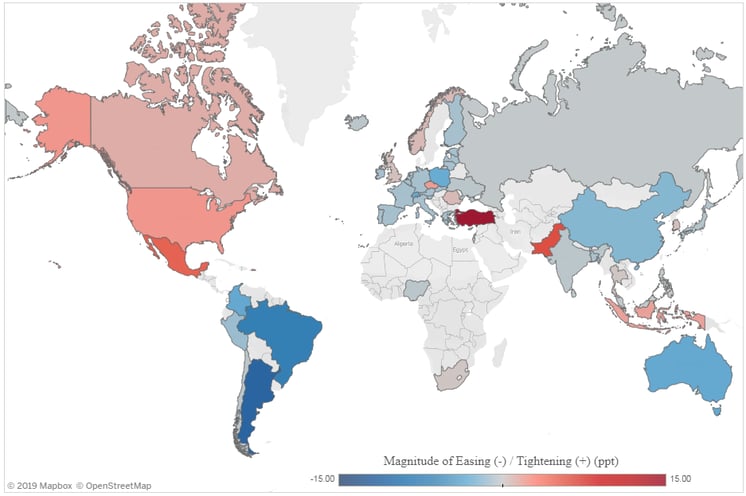 As you can see from the Council of Foreign Relations Global Monetary Policy Tracker, global monetary policy is firmly in easing mode and as we see it, the race to the bottom has just began.   At the current state of interest rates there is already over $14 trillion negative yielding debt. I hate to think of how much more this will grow when other central banks start slashing rates to negative.  No thanks, I’m good – I’ll just keep adding to my gold position. 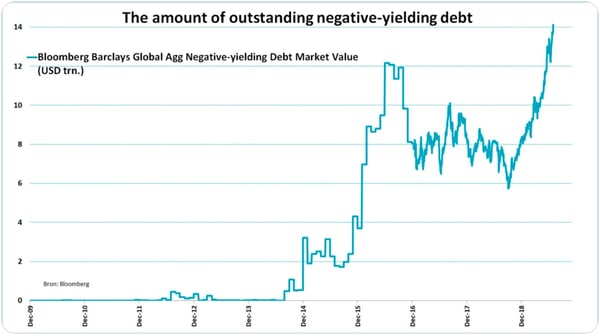 In the week ahead, we have two more central bank decisions. The Reserve Bank of Australia will probably stand pat at its meeting on Tuesday after cutting rates in its last two meetings. The Reserve Bank of New Zealand meets the following day, fully expected to lower the cash rate by 25 bps cut to 1.25%. The other notable events are China’s response to Trump’s new tariffs, flash PMI for the US and UK, final monthly PMIs for Eurozone countries, German industrial production and trade figures, US inflation readings, and Canadian employment data.